Well, the holidays are over. The tree is down (or still standing awkwardly in the living room – you swear you’ll get to it next weekend), the lights are stored in a tangled, haphazard swarm, and the Christmas cookies are finally gone. For me, the end of the holidays signifies the bleak onset of a long, gray winter, with nothing to look forward to until… uh, Halloween? This post-holiday season, however, I decided to change that.

In 2007, the fabulous Pioneer Woman, Ree Drummond, started a nationwide holiday tradition of making homemade cinnamon rolls to gift to friends and cohorts. Ree swears to have made friends, influenced people, and even received several spontaneous serenades with her rolls. The recipe was inspired by her mother, who also claims the same celebrated recognition through her failsafe recipe.

These cinnamon rolls are so good, Ree even gives chuckle-worthy caution to her dear readers:

A warning. If you follow these instructions and wind up delivering these cinnamon rolls to your friends, be prepared for any of the following to occur: 1. They’ll call you after they’ve taken the first bite and profess their eternal love for every ounce of your body. 2. They’ll pass out after the first bite, hit their head on the kitchen counter, sustain a concussion, and sue you for damages, despite the fact that the one bite they tasted of your cinnamon roll was the single most profound culinary experience in their miserable little life. 3. They’ll call you and ask for the recipe, saying, “HOW did you make those?” 4. They’ll call you and propose marriage. 5. They’ll hug the cinnamon roll pan, get frosting all over their clothes, and send you the bill for the dry cleaning. 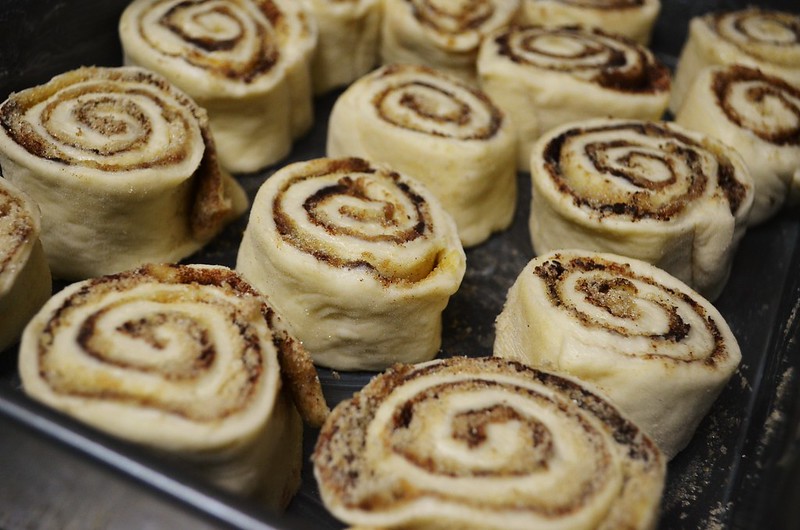 Even though I was late on the holiday gifting idea, I was determined to brighten up an otherwise dreary post-Christmas slump with a pan of ooey, gooey cinnamon rolls. Heck, I’d even invite some friends over for breakfast, so I’d have the illusion that I was giving them as a gift. Right? Right.

Now, my fair warning to you: These ain’t no wham-bam-pop-the-can cinnamon rolls. These start from scritchety scratch, with flour and milk and yeast and all that other time-consuming stuff. The upside? You’ll work up an appetite, and you’ll never taste anything better. I promise.

The fail-proof recipe comes together in a few hours, with some down time sprinkled in. Speaking of sprinkling, if you’re a nut fan, add some toasted pecans or walnuts to the filling for an added crunch.

The original recipe calls for a maple icing, which made my nose wrinkle. I’m more of a vanilla girl myself, so I changed things up a bit with the addition of vanilla, bourbon and cream cheese. No lookin’ back.

My advice for you: Make these on a Saturday night when you’ve got nothing better to do. Let them rise in the fridge overnight, and then bake them off Sunday morning for a few of your besties. Have a few mimosas while you’re waiting, and toast to cinnamon rolls and the dreary winter that lies ahead. You’ll be the talk of the town, and maybe even get a hug or two. I did. Enjoy! 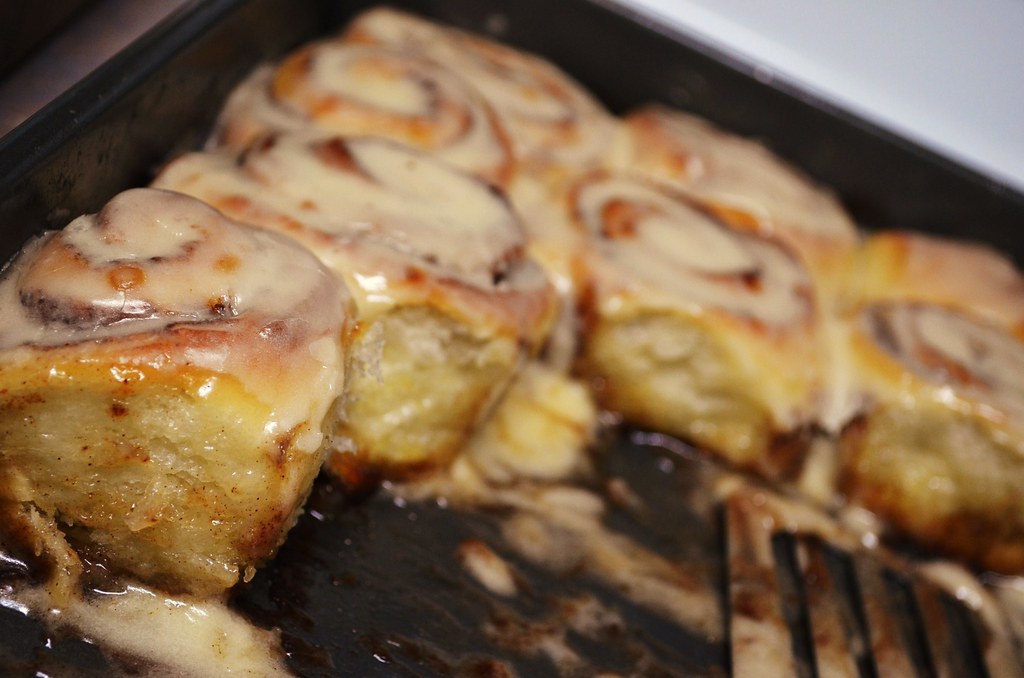 For the dough: Heat the milk, vegetable oil and sugar in a medium saucepan over medium heat to just below a boil. Set aside and cool to warm. Sprinkle the yeast on top and let it sit for 1 minute. Add 4 cups of the flour. Stir until just combined, then cover with a clean kitchen towel, and set aside in a warm, draft-free place for 1 hour.

After 1 hour, remove the towel and add the baking powder, baking soda, salt, and the remaining 1/2 cup flour. Stir thoroughly to combine, or use a standing mixer with the dough hook attachment. Use the dough right away, or place in a mixing bowl, cover and refrigerate for up to 3 days, punching down the dough if it rises to the top of the bowl. (Note: Dough is easier to work with if it’s been chilled for at least an hour or so beforehand.)

To assemble the rolls, remove the dough from the pan and cut it in half. On a floured baking surface, roll half the dough into a large rectangle, about 24 x 10 inches. The dough should be rolled very thin.

To make the filling, combine the white sugar and brown sugar in a mixing bowl. Set aside. Pour half of the melted butter over the surface of the dough. Use your fingers or the back of a spoon to spread the butter evenly. Generously sprinkle ground cinnamon and half of the sugar mixture over the butter. If you’re adding nuts, now’s the time. Gooey is the goal.

Beginning at the end farthest from you, roll the rectangle tightly towards you. Use both hands and work slowly, being careful to keep the roll tight. When you reach the end, pinch the seam together and flip the roll so that the seam is face down.

Slip a cutting board underneath the roll and with a sharp knife, make 1 1/2-inch slices. One log will produce about 10 rolls. Place the sliced rolls in a buttered pan, being careful not to overcrowd. Repeat the rolling/sugar/butter process with the other half of the dough and one more buttered pan.

Preheat the oven to 375°. Cover both pans with a kitchen towel and set aside to rise on the countertop for at least 20 minutes before baking. Remove the towel and bake for 15 to 18 minutes, until golden brown. Don’t allow the rolls to become too brown.

While the rolls are baking, make the icing: In a large bowl, whisk together the powdered sugar, milk, butter, cream cheese and salt. Add the vanilla and bourbon, and whisk until very smooth. The icing should be somewhat thick but still pourable.

Remove the rolls from the oven when done. Immediately drizzle the icing over the top of the hot cinnamon rolls, making sure to get all around the edges and over the top. Serve hot. 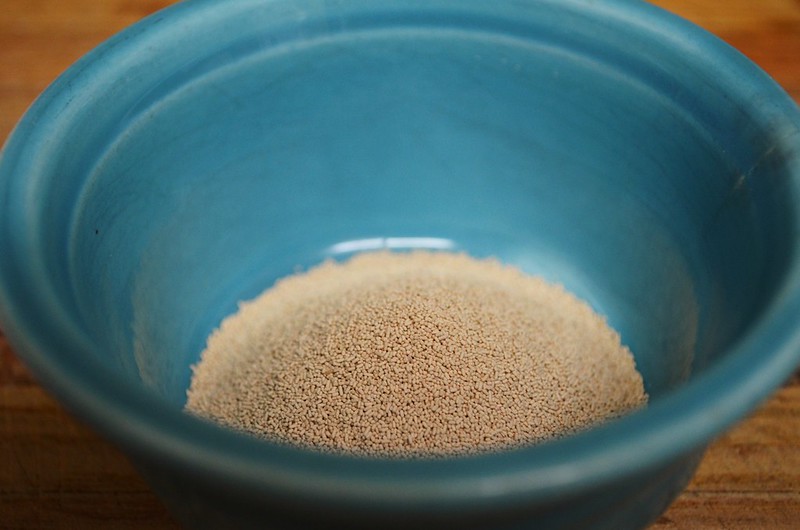 Laura Hobbs
Laura is a regular contributor for the Fayetteville Flyer. She was born and raised in Fayetteville, but has recently moved to Boulder, Colorado. She is a self-proclaimed foodie and avid cook. For more from Laura, check out her food blog, Prana & Pie.