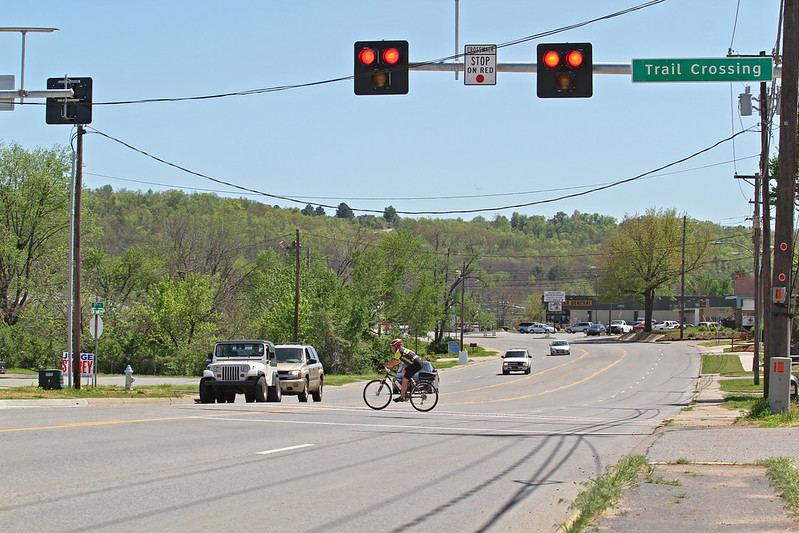 A new traffic signal was recently activated on School Avenue, marking the completion of the half-mile extension to Frisco Trail in south Fayetteville.

The intersection uses a pedestrian hybrid beacon designed to allow protected pedestrian and bicycle crossings with minimal disruption to vehicular traffic. Unlike an ordinary traffic signal, the beacon only lights when activated by a someone who wishes to cross the road. 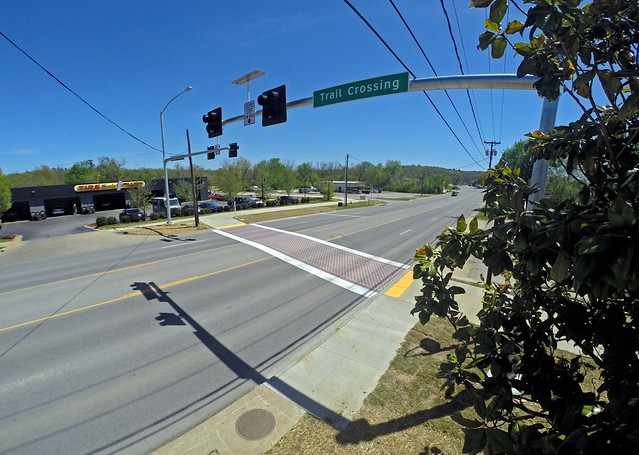 Once a pedestrian or cyclist pushes a button, the beacon sequentially flashes yellow, then displays steady yellow, and finally steady red to notify drivers to stop. Pedestrians are then shown an upraised hand symbol with a countdown display informing them of the time left to cross. After several seconds, the traffic beacon flashes red. During this time, drivers can proceed after coming to a full stop and checking that pedestrians and cyclists have already crossed their lane of travel. Drivers must still come to a full stop before proceeding during the flashing red phase.

The signal is part of a project to extend Frisco Trail south from Martin Luther King Jr. Boulevard to Walker Park.

The new path leads joggers and cyclists through a 100-foot-long lighted tunnel that stretches from the south side of MLK behind Greenhouse Grille to an area near the Farmers Cooperative building. The trail then crosses Tanglewood Branch creek and runs alongside The Grove apartments before crossing the creek again over a bridge behind El Camino Real Mexican restaurant. From there, the path crosses School Avenue and heads east along 9th Street by Tire Tracks. The final leg sends trail users across a bridge over Spout Spring Branch creek to connect with the Walker Park trail behind the public skate park.

The new section of Frisco Trail will eventually connect to the Tsa La Gi Trail, a 1.8-mile path that will run west to Hollywood Avenue next to the University House (formerly The Domain) student apartment complex, and the Town Branch Trail, a 2.8 mile path planned to eventually run from Razorback Road to South City Lake Road.

Aside from connecting south Fayetteville residents to the city’s trail system, the Frisco Trail extension will also serve as the southern end of a 36-mile network of trails called the Razorback Regional Greenway that will run north to Lake Bella Vista.

How To Use A Pedestrian Hybrid Beacon