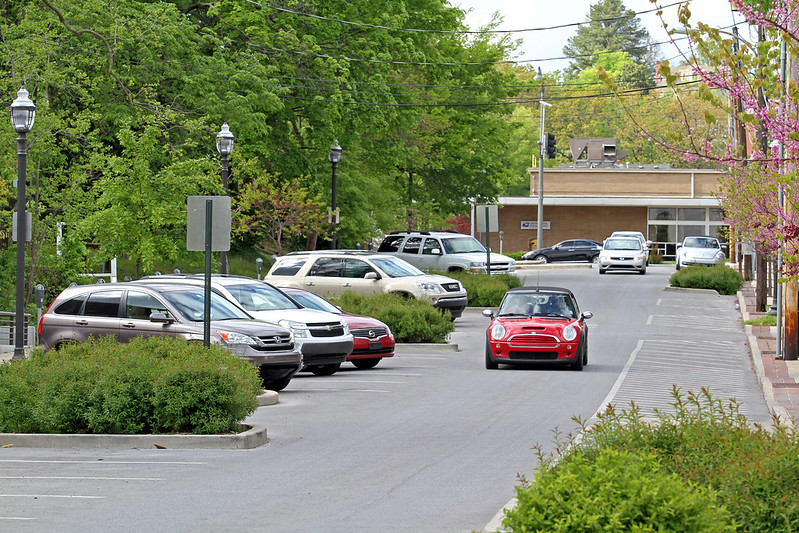 Traffic moves along Block Avenue near a section of 28 back-in parking spaces between Dickson and Spring streets.

City Council members on Tuesday agreed to keep the 28 back-in parking spaces at the north end of Block Avenue.

A group of residents, led by Nancy Bittle, asked the council’s Transportation Committee to explore changing the setup in March. The committee heard from city staff about two possible options for change, but forwarded the discussion to the full City Council after seeing the price tag for the work.

Option 1 is to tear out the concrete islands and re-build them in the opposite direction before milling and re-striping the street. This option would remove three of the 28 parking spaces between Dickson and Spring streets, and would cost about $42,000. 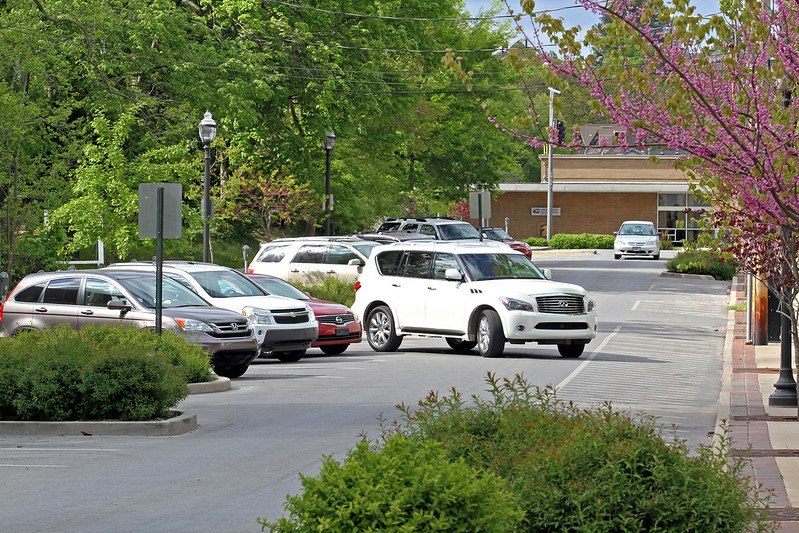 A driver backs into a parking space Thursday on Block Avenue in downtown Fayetteville.

Option 2 is to simply mill the street and re-stripe the parking lines in the opposite direction. The work would cost about $28,000, and would remove eight of the 28 parking spaces.

Bittle, and others who spoke Tuesday night, said after four years of dealing with back-in parking on Block, they still struggle when trying to back into one of the parking spaces.

“Parking on Block is very difficult,” said Bittle, who added that she once had to circle the block twice before she was able to back into a parking space. She said each time she stopped to park, the car behind her pulled up too close for her to back up.

Camille Garland, a stylist at Shag Hair Salon, 224 N. Block Ave., said she has lost “many clients” because the parking spaces in front of the salon were too difficult to navigate.

“We’ve all tried to educate our clients, but it’s been four years and we still have gotten nowhere,” said Garland. “That is a really hard thing to accept.”

Alderwoman Sarah Marsh said there are a wide variety of parking opportunities within one block of that area for a customer who chooses not to park in one of the 28 back-in parking spaces.

Marsh pointed to other nearby parking choices including head-in parking one block south on Block Avenue, a city parking lot at the corner of Spring Street, and several parallel parking spaces just around the corner.

Tom Overbey, who owns an office building with six business tenants at the corner of Block Avenue and Spring Street, said while some people do have difficulty parking, most drivers seem to have no trouble at all.

He said his window overlooks the street, and he sees the parking spaces fill up regularly.

Overbey said with four undeveloped lots just waiting to be built upon, it’s important to keep as many parking spaces as possible along Block Avenue.

“When those are developed there’s going to be a lot more demand for parking in the first block,” said Overbey.

City Engineer Chris Brown said while he’s not surprised that there have been some complaints, he stands by the safety advantages of back-in parking as presented in 2010. Brown said back-in parking is safer than head-in parking, mostly because it can reduce the chances of collisions between cars backing blindly out of parking spaces and bicycles and vehicles in the lane of travel.

“The back-in parking, just from looking at the numbers, proves that it is safer,” said Jordan.

In all, aldermen heard from about a half dozen residents who said the back-in parking should be replaced with a more traditional design, but the calls for change weren’t enough to convince the majority of Council members Tuesday night.

Aldermen Justin Tennant, Martin Schoppmeyer and Alan Long said they wanted a change, but others said they couldn’t justify the price tag of either option to redo Block, especially since the city’s transportation work plan is already in place for 2014.

“I see it is evidently a problem,” said Alderman Mark Kinion. “But I don’t know where we are going to get the money to change it. I don’t think it would be fiscally responsible for me to vote to take money away from another project at this time.”

Kinion, along with Council members Sarah Marsh, Matthew Petty and Rhonda Adams all voted for a resolution to reaffirm the original back-in parking design on Block Avenue. Mayor Lioneld Jordan cast the fifth vote needed to pass the resolution.