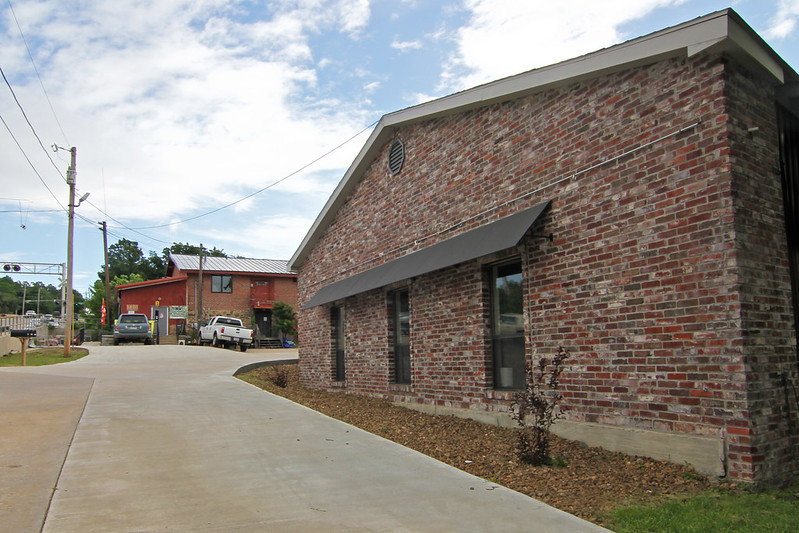 A building at 701 W. North St. will soon be the home of a new Fayetteville craft brewery and taproom.

Partners Jason Corral and Carey Ashworth said they have most of the leg work done, but are awaiting final approval from the state. It has been a long process of permit applications, property rezoning, and modifications to the brewing facility, but they hope to open their doors in July.

Most professional brewers nowadays get their start in home brewing, and Corral is no different.

About five years ago he received a home brewing kit as a birthday gift. Like most new home brewers he struggled with the hobby. But then he started applying some of his engineering knowledge (he has a degree in biological engineering) to the brewing process and immediately saw improvements in the finished product.

Brewing stayed top-of-mind as he later decided what direction to take his life.

“In grad school I realized I didn’t want to be doing what I was getting my degree in,” he said. “I decided it wasn’t worth it, so I started looking for an exit strategy.”

He initially partnered with two friends to hatch the concept for Columbus House, but they decided to walk away when it became obvious that the venture would require loans to get off the ground. That’s when Ashworth entered the picture.

Corral and Ashworth coach the women’s lacrosse team at the University of Arkansas, where they both did their undergraduate work. They know they work well together, so it was a no-brainer to become partners on the brewery project.

The brewery and the beer

What inspired the name of the brewery?

“I live in a house on Mt. Sequoyah – on Columbus Boulevard,” said Corral. “All my best memories and growth experiences have happened at this house.”

“We always had an open door policy at our house,” he added. “People always loved coming over. It was a really friendly atmosphere, and that’s what I want to try and capture at the brewery – anyone should feel comfortable coming in. Come in, hang out, write a paper, and have a beer.”

“The atmosphere is really important to us.”

The brew house will consist of a 3-barrel heat exchange recirculated mash system – or HERMS for short. The benefits of this type of setup include precise mash temperatures, crystal-clear wort, and the opportunity for advanced automation.

Ashworth said Columbus House will focus on a small number of brews to start. Corral and Ashworth are both young and athletic, so it’s no surprise that they hope to cater to the active lifestyle found in Fayetteville. The brewery’s proximity to the trail system should bring in thirsty bikers and runners by the droves.

“Supporting an active lifestyle is really important to us,“ said Corral. “There’s no reason you can’t run and drink beer in the same day.”

Starting small, but already thinking ahead

The local brewing community has grown by leaps and bounds over the last few years, and only time will tell if the market can support additional players. But partners Jason Corral and Carey Ashworth appear to have terrific organizational skills and – most importantly – a passion for craft beer.

They’re starting small, but already know where they want to take Columbus House in the future.

“The number one goal is paying off our loan,” said Corral. “And the tap room is a good way to start.

“But Carey and I are ambitious and have a good work ethic. We do want to expand – we want to be a distribution-oriented facility someday.”

The key to growth in craft brewing is a consistently good product. You will get your chance to evaluate the newest player in the market – Columbus House Brewery & Taproom – later this summer.