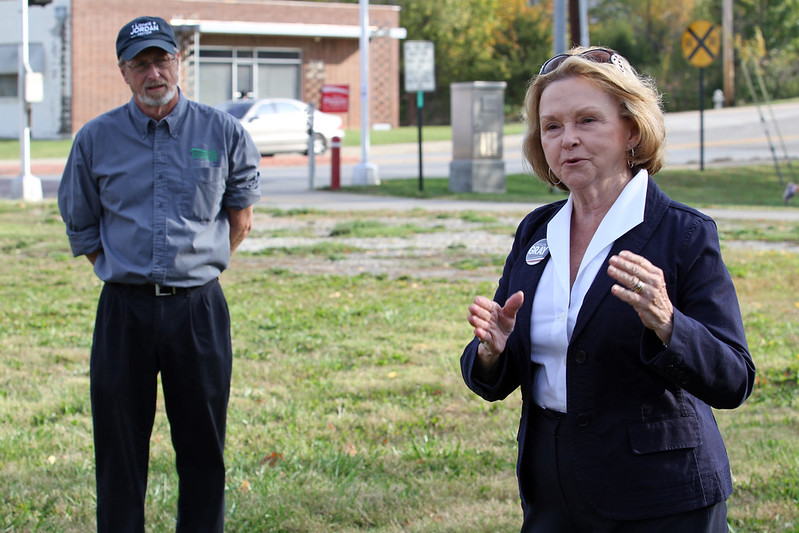 Adella Gray speaks during a groundbreaking ceremony for the Marion Orton Recycling Center on North Street in 2012.

Adella Gray announced this week she’ll run for a third term on the Fayetteville City Council.

She will face Sonia Davis Gutierrez for the Ward 1, Position 1 seat. As of Friday, no one else had announced plans to run in the south Fayetteville ward.

Gray was elected to the council in 2006, and is the longest active member of the group. The 74-year-old retiree said her experience and “institutional memory” is what sets her apart from other aldermen.

“This diverse city needs a diverse City Council and I bring an age diversity that is important to have represented,” wrote Gray in a news release.

She pointed to several projects she’s proud to have supported, including the downtown parking deck, regional park, College Avenue flyover bridge, and the recent purchase of Mount Kessler.

“It has been a very productive period, but there is always more work to be done,” she said.

If re-elected, Gray said she’ll work to expand the city’s recycling program to more apartments and businesses, and push for more “cutting-edge” legislation, like the streamside protection ordinance and the recent creation of the state’s first energy improvement district.

“These new laws have had my full support – not only because my constituents supported these pieces of legislation, but because it was the right thing to do,” she said. “I will always welcome such progressive ideas while being careful not to over extend our staff and our budget.”

Gray ran unopposed in Ward 1 during the 2010 general election, and narrowly defeated Richard Osborne in 2006.

She challenged Rep. Charlie Collins, R-Fayetteville for the Arkansas House District 84 seat in 2012, but lost the race with 46 percent of the votes.

There are three other Position 1 seats up for grabs on Nov. 4, including positions held by Mark Kinion (Ward 2), Justin Tennant (Ward 3) and Rhonda Adams (Ward 4). The city attorney position, held by Kit Williams, is also up for election.

Kinion and Tennant announced this week they’ll run again. Williams has said he’ll seek re-election. Adams plans to move to Florida, and will not run again.

structures that can be built next to single-family homes

* Gray was absent during votes to approve an ordinance regulating door-to-door sales, and committing the city to up to $150,000 for a traffic signal at College Avenue and Masonic Drive where a Whole Foods Market is planned.

Adella Gray, announced she will file and run for the Ward 1, Position 1, Fayetteville City Council. This will be the 3rd term Council Member Gray is seeking.

In her 7 1/2 years tenure, Adella has served as Chair of Nominating Committee, a Council member appointed by Mayor Jordan to serve on the Water, Sewer & Solid Waste Committee, the Audit Committee, Equipment Committee and Streets/Transportation Committee. Adella was also elected by her peers on the City Council to serve as Vice Mayor and handle duties in the absence of the Mayor. Adella is the most tenured member of the City Council and the City has utilized her expertise to assist in the selection of numerous City Contractors, Engineering & Architect Professionals, and numerous other Selection Committees over the years she has served on the Fayetteville City Council.

Adella has provided leadership to the City Council at a time when the seniority and experience of the City Council lost years of experience as long standing members of the council decided to no longer run for office. “It has been a very productive period, but there is always more work to be done and I look forward to being a part of that work” stated Alderman Gray. “Recycling is an area I continue to be interested in expanding. I would like to see apartment and business recycling become a reality. We must continue working to expand, though we have made significant progress”. Adella has also been very supportive of retaining and developing staff working on behalf of the citizens – “Improving salaries and benefits of city workers while maintaining a balanced budget has been a goal of mine. It is important to have the best staff possible working on behalf of our citizens.”

“A top priority of mine has always been and will continue to be, responding to the calls and needs of our Ward 1 residents.” Gray commented. “And while representing the citizens of Ward 1 is one of my biggest priorities – I also think it is important to keep the health and welfare and economics of the entire City in the fore front of our decisions. It is important that the entire City be successful. “ Adella has championed connectivity of streets, improved sidewalks and walkability, compensation plans that support having the best public safety department possible when responding to police and fire needs. Adella has also supported major infrastructure development – improved roads, Boulevards and trees on major Highways such as Hwy 265, Garland Ave., Rupple Road and Van Asche – all new projects to help drive growth in sales tax and for our citizens ro more easily access key parts of our city.

Adella has been a key proponent in her tenure of supporting cutting-edge legislation, like the City’s new Streamside Protection Ordinance focused on protecting Water Quality and reducing further erosion of our water ways. Support for the new enabling PACE legislation. Adella stated “These new laws have had my full support – not only because my constituents supported these pieces of legislation, but because it was the right thing to do. I will always welcome such progressive ideas while being careful not to over extend our staff and our budget.”

“The Parking Deck, the regional park, the “flyover” bridge near the mall, the purchase of Mt. Kessler are ongoing projects which have had my full support and great anticipation of completion. “
“This administration’s commitment to expansion of our sidewalks program, especially for our school children, has been a great achievement. Ward 1 has benefited from this program, as well as the feeding of Fayetteville, with many community gardens. Working with and supporting the Fayetteville Chamber of Commerce in Economic Development, as well as supporting our city’s current business, has been a real joy.” “I look forward to being a part of the governing body of what has become the most progressive city in the state. I look forward to continuing to bring my experience as an educator, my experience as a grand parent & mother, my experience as a long time resident of Fayetteville, my experience as a Council Member on the Council and the institutional memory that I think is important to have in the discussions we undertake. This diverse city needs a diverse city council and I bring an age diversity that is important to have represented as well. I look forward to continuing to represent my Ward, the citizens of our entire city – and I ask for your support in this re-election bid.