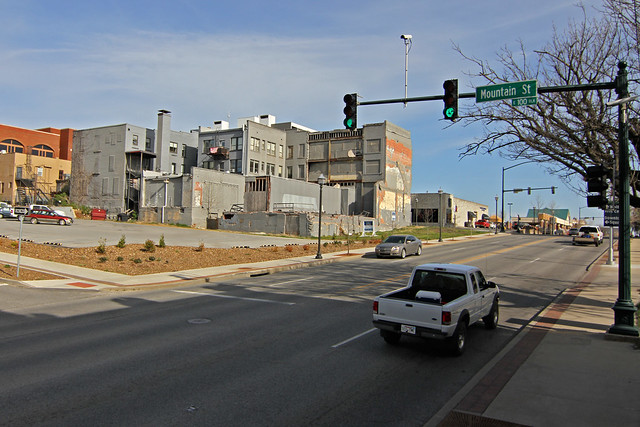 The new owner of one of the most prominent pieces of vacant property in Fayetteville apparently has big plans for the lot that sits at the gateway to the downtown square.

City Council members are set to continue a discussion on whether to approve governance changes for the Walton Arts Center. Here’s the full agenda.

Since opening last month, bartenders at the new Shulertown food truck court have been filling beers from the bottom up using a relatively new system called Bottoms Up Beer.

Former marketing professional James Smith never thought he’d be in the furniture making business. Read all about local furniture company James + James in our most recent Only In Arkansas feature.

Savoir-Faire has some awesome leather fringed bags in stock on the square and online.

Chuck Barrett announced yesterday he’s stepping down as the play-by-play voice of Arkansas baseball broadcasts after 23 seasons. He’ll stay on for football and men’s basketball games, though.

Others: Bluesman James Cotton is 79, dancer Twyla Tharp is 73, singer Deborah Harry is 69, singer Fred Schneider of The B-52?s is 63, singer Victor Willis of the Village People is 63, actor Dan Aykroyd is 62, actor Alan Ruck is 58, Olympian Carl Lewis is 53, actress Pamela Anderson is 47, rapper Missy Elliott is 43, actress Julianne Nicholson is 43, actress Liv Tyler is 37 and actress Raini Rodriguez is 21.