A crew with Springdale-based Ken’s Signs works Wednesday to install a marquee above the UARK Theatre entrance on Dickson Street.

A 74-year-old Dickson Street landmark that was was removed from the UARK Theatre in 2011 has returned. 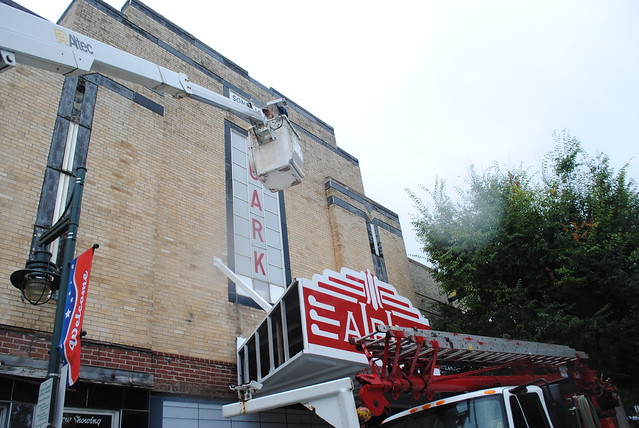 A crew from Springdale-based Ken’s Signs began installing a completely restored version of the sign this week, a task that began on Tuesday and that one worker said was about half finished as of Wednesday.

Sidney’s Emporium, a retail store that had called the front part of the theatre home for several years, moved out in May after the building’s owners increased the rent on the space at 647 W. Dickson St.

We’re not sure if someone is working to restore the former movie theatre inside the space, or if the new marquee is just a fulfillment of the promise from three years ago to eventually restore the sign to its former glory.

We’ve placed calls to both Dunn Property Management, and leasing agents Sage Partners to try and get more information, but haven’t had any luck.

Anyone know what’s up?