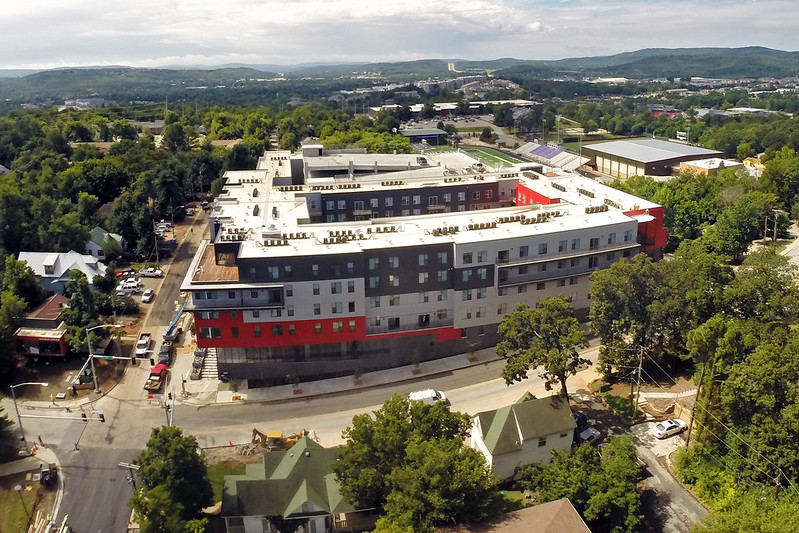 Construction is almost complete on The Cardinal at West Center on Duncan Avenue and Center Street in Fayetteville. The new student apartment complex includes 150 units with 470 bedrooms.

Record enrollment at the University of Arkansas is keeping apartments full in Northwest Arkansas even with all of the new student housing projects being built in Fayetteville.

Units are full and rents are increasing, according to findings of the most recent survey (PDF) conducted by commercial real estate brokerage firm CBRE Northwest Arkansas.

Average occupancy remained strong at 96.5 percent in the four major cities, the same rate reported a year ago. Average rents are $600 per month, an increase of $12 from last year.

In an effort to meet demand, developers have built four student apartment complexes, adding 2,582 bedrooms in Fayetteville since 2013. Another 470 beds will be added this year when The Cardinal at West Center opens. With four more complexes planned over the next two years, at least 1,800 more bedrooms are expected in Fayetteville by the end of 2016.

The university added 630 bedrooms of its own when Founders Hall and the renovated Hotz Honors Hall opened last fall. As of today, however, more than 99.5 percent of on-campus housing slots are full across the university’s 17 residence halls and one apartment complex, said Scott Flanagin, executive director of communications for the UA student affairs division.

Construction of market rate units (non-student complexes with more than 50 units) has started to pick up across Northwest Arkansas.

Work is underway on the Trails at Rainbow Curve, a project that will add 487 units in Bentonville. Ground was also recently broken on a mixed-use project called Thrive which will include 62 apartments near the downtown Bentonville Arts District. In Rogers, plans were recently approved for the Promenade Point Apartments, a 200-unit development behind Pinnacle Hills Promenade.

“It is likely that multifamily developers will take note of the continued high occupancies in this area causing market rate construction to continue to pick up,” said Donahue.

In the near term, Donahue said he expects overall occupancy to hold firm and rental rates to continue increasing until more market rate apartments are built across the region.

Source: Northwest Arkansas Apartment Market Survey (PDF) for mid-year 2014. CBRE surveyed just over 22,000 of the area’s approximate 28,000 units. The survey does not include complexes with less than 50 units.