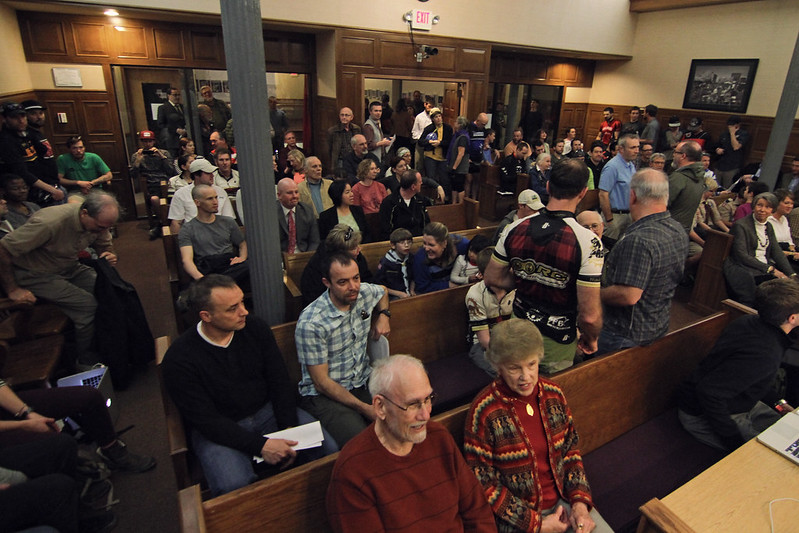 The Fayetteville City Council chambers are sometimes filled with a standing-room-only crowd, like this scene in February when aldermen discussed buying 328 acres of land atop Mount Kessler.

Update 1: The Aug. 19 meeting will not be moved to another venue. Aldermen voted unanimously to keep the meeting at City Hall, where additional rooms and video monitors will be opened for the expected large crowd.

With a massive turnout expected at the upcoming anti-discrimination vote, Fayetteville aldermen will consider moving the Aug. 19 City Council meeting to a larger venue.

Smith said officials are concerned that the council chambers inside City Hall won’t hold the amount of people expected to show up for Tuesday night’s discussion and expected vote.

Over 100 people attended the Aug. 5 meeting during the second reading of a proposal to ban discrimination based on sexual orientation and gender identity. The council chambers were packed tight, with people standing in the aisles and flowing out the door into the hallway.

Most of those who spoke at the meeting were against the proposal. If those people return and a possible wave of supporters show up this week, it could be difficult to accommodate everyone who wants to speak.

Smith said no specific locations have been formally proposed, but one possible venue option is the Fayetteville Town Center, located just a few steps away from City Hall on the downtown square.

Collin Brunner, director of sales at the Town Center, said the venue has not been reserved for Aug. 19, so it is available for use on Tuesday. Brunner said the facility could hold as many as 1,000 guests if the City Council decides to move the meeting.

The proposal, brought forward by Alderman Matthew Petty, would appoint a city staff member to field complaints from residents who feel they’ve been discriminated against during housing transactions, employment decisions, and other public accommodations in Fayetteville.

If approved, landlords and business owners could be investigated and prosecuted for unjustly evicting or firing someone because of their sexual orientation, gender identity, socioeconomic background, marital status or veteran status.

State and federal law prohibits discrimination based on someone’s age, gender, disability, race or religion. But in Arkansas there are no non-discrimination laws that cover the other categories, including sexual orientation and gender identity.

» Read more about the proposal