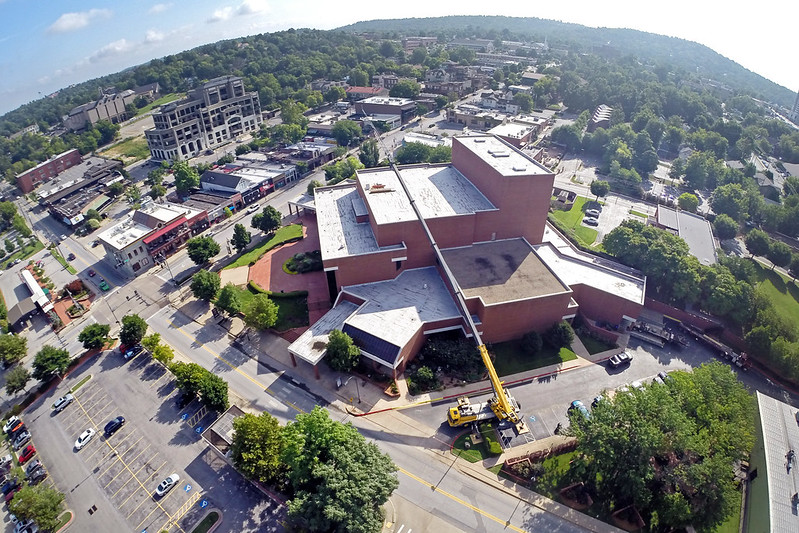 Crews work to repair the roof at the Walton Arts Center on Dickson Street in Fayetteville.

The Walton Arts Center box office is back open for business in Fayetteville.

Officials said crews have completed a project to repair problems with the trusses above the stage in Baum Walker Hall.

The problems were found last month during preliminary work on an upcoming $23 million expansion and renovation of the center.

Arts center CEO Peter Lane said engineers “discovered that the current load on the existing trusses appeared to be excessive.”

“This apparent structural deficiency meant that Baum Walker Hall might not be safe for public occupancy,” Lane said.

The facility was immediately closed, and the remaining shows scheduled at the arts center were either postponed or moved to another location.

The box office is now open for those that want to purchase tickets for Foster the People with special guest Fitz and the Tantrums who’ll perform on Oct. 9 at the Arkansas Music Pavilion.

The Walton Arts Center kicks off its new season on Sept. 28 in Baum Walker Hall with legendary six-time Grammy-winner Dr. John and the Nite Trippers. He will be joined by local favorite, The Cate Brothers. Tickets for the 2014-15 Walton Arts Center season can be purchased in person at the box office, by calling 479-443-5600 or online at waltonartscenter.org.