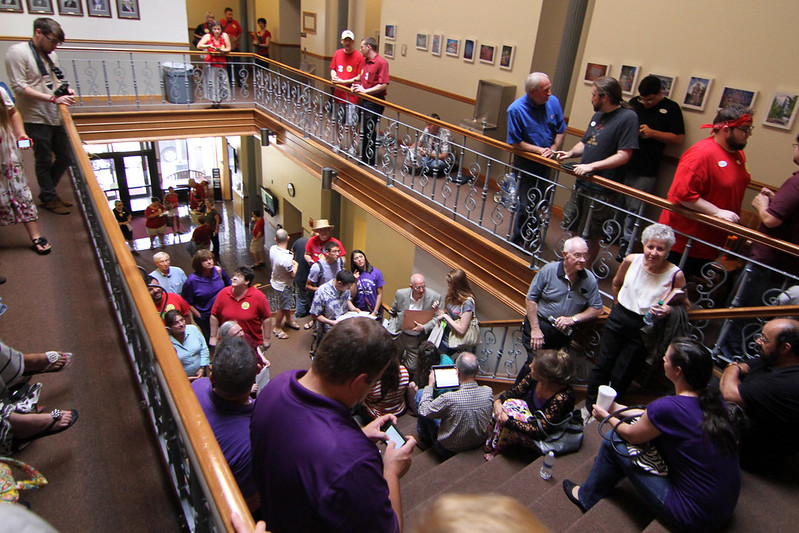 A crowd began forming inside City Hall at around 3 p.m. Aug. 19 for a 5:30 p.m. City Council meeting which included the final reading of a contentious anti-discrimination ordinance.

Fayetteville Mayor Lioneld Jordan has selected a group of people to help provide input on how to implement the city’s new civil rights ordinance approved by the City Council in August.

The ordinance, which goes into effect Sept. 20, prohibits business owners and landlords from unjustly firing or evicting someone because of their sexual orientation, gender identity, socioeconomic background, marital status or veteran status. It creates a civil rights administrator position to receive complaints from residents who feel they are victims of those specific types of discrimination.

The idea for the group was suggested by Steve Clark, president and CEO of the Fayetteville Chamber of Commerce, in a Aug. 28 letter (PDF) written to Jordan.

“I tried to choose a very diverse group of people who represent not only the protected classes and the business owners, but also those who were against the ordinance itself,” said Jordan.

Jordan will serve as chairman of the group’s input session, which is scheduled for 6 p.m Thursday, Sept. 4 inside room 326 at City Hall, 113 W. Mountain St. in downtown Fayetteville.

Jordan said residents are invited to attend, but the meeting will not include a public comment period, as nearly 10 hours of public input was received during the final reading of the ordinance on Aug. 19.

The meeting is scheduled to be filmed by and later aired on the Fayetteville Government Channel.