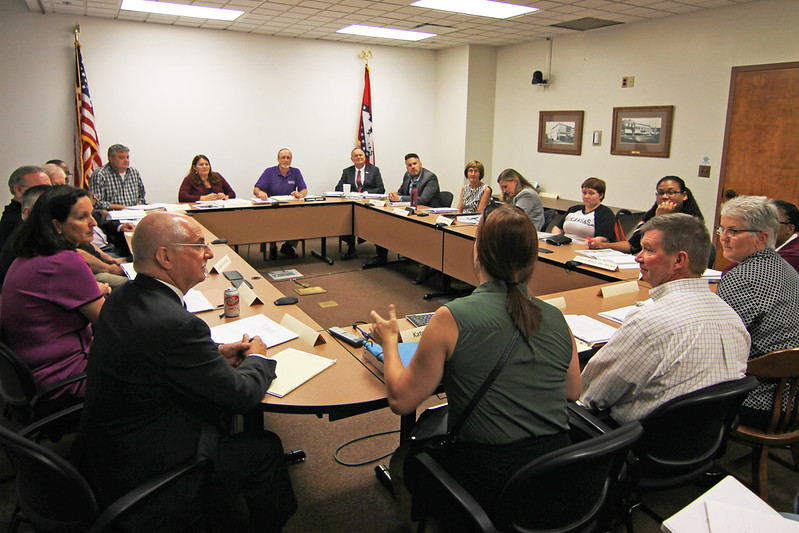 A panel of business executives, landlords, faith leaders, attorneys and minority representatives gathered Thursday at City Hall to give suggestions to Fayetteville Mayor Lioneld Jordan on how to implement the city’s new civil rights ordinance.

The ordinance, which goes into effect Sept. 20, prohibits business owners and landlords from unjustly firing or evicting someone because of their sexual orientation, gender identity, socioeconomic background, marital status or veteran status. It creates a civil rights administrator position to receive complaints from residents who feel they are victims of those specific types of discrimination. Violations of the law could lead to a fine of up to $500.

Jordan made clear what the focus of the meeting would be.

“Whether you think it’s a good ordinance or a bad ordinance, that’s not the question here,” said Jordan. “What I’ve asked this group to do is to give me advice on how to best implement the ordinance,” he said.

Jordan said no public comment would be taken Thursday.

“We’ve heard 13 ½ hours of public comment on this,” he said. “As far as debating the ordinance, that has been done.”

Jordan said he asked City Attorney Kit Williams to be the administrator of the new ordinance.

“I could not think of anyone that would be better qualified or suited to be the first Civil Rights Administrator,” said Jordan. » Read a memo (PDF) from Kit Williams on his decision to accept the Civil Rights Administrator role.

Williams said despite a heavy workload and a reluctance to step into a whirlwind of controversy, he agreed to take up the post for 12 months. During that time, Williams said he hopes Jordan will work to select a permanent administrator who can attend training to improve their mediation skills and gather more knowledge about civil rights complaints.

Leif Olson, Fayetteville long-range planner, said each of the cities – Bloomington, In., Columbia, Mo., Ames, Ia., and Iowa City, Ia. – utilize a civil rights administrator with a background in law.

Williams said he views the job as primarily someone who mediates, and does not plan to be an investigator.

He said he’ll listen to a complaint and then immediately contact the person who is accused of discrimination to try and get the full story.

“I was a deputy prosecuting attorney for 5 ½ years,” said Williams. “I know there are two sides to many stories – most stories, I would say.”

Williams said his number one goal will be confidential mediation, since he’ll have no authority to prosecute anyone and no right to issue any fine or punishment.

“I think that most of what my work will be is trying to bring the two sides together so that there is a resolution, and that’s it,” he said.

If no agreement can be made, the city prosecutor would take up the issue and decide whether to pursue a fine. Because Williams supervises the city prosecutor, he said he would not participate in any investigation of alleged discrimination.

Williams said he believes education will be key in resolving many of the complaints.

“There will be some problems, but I think the vast majority of people want to obey the law and want to treat people fairly,” he said. “I think that this ordinance will help in areas that might’ve been gray for some people who didn’t realize that things have changed and you can’t treat people like that anymore.” » Read a memo (PDF) from Kit Williams on his legal interpretation of the civil rights ordinance.

Sue Madison, a local landlord and former Arkansas state representative and senator, said a better definition of “socioeconomic background” was needed to ensure there is no ambiguity over what is prohibited.

The ordinance lists socioeconomic background as one of many forms of discrimination that will become illegal in Fayetteville once the new law goes into effect. Some residents have said the new law could be interpreted to mean landlords or banks no longer have the right to request a credit check.

Williams said that’s not how he sees it. Socioeconomic “background,” he said, is different from socioeconomic “status.”

Williams said landlords and banks have legitimate reasons for needing to know if someone can afford their rent or loan payment. He said nobody would be in violation of the ordinance for using a credit check, requesting a pay stub, or otherwise asking for proof of ability to pay and then relying on that evidence to decide whether to loan money, extend credit, or agree to rent to an individual.

Some suggested the city should keep accurate records of complaints, and enact a specific timeline for the procedure of handling a complaint. Others said privacy should be upheld on both sides of a complaint when it comes to documenting alleged discrimination. Williams said he hopes to do a lot of the mediation work over the telephone or in person, so there won’t be much specific documentation as far as allegations are concerned. He will, however, include names and other basic information about the complaint.

He said he knows privacy will be a concern, but city attorneys in Arkansas do not have client confidentiality mandates, and are required to comply with all public requests for documentation.

“I’m operating in a fishbowl here, so if somebody wants the help of this government, then they’re not going to be able to hide behind a number,” said Williams. “And businesses can’t hide either.”

Anne Shelley, director of the Northwest Arkansas Rape Crisis Center, said a commission would help ensure fairness when dealing with issues that affect people who are in the minority.

“Having a commission or body of people that not only have legal skills but also real life skills needed to reflect upon the folks who are going to be affected by this is so vital,” said Shelley. “Not only to make sure it’s done correctly…but also to make sure there is representation.”

Olsen said all four peer cities he analyzed utilize some form of a civil rights commission regarding complaints.

Jordan said he was strongly considering forming a commission, but hadn’t yet made up his mind.

“I will make that decision pretty soon,” he said.

Click below to watch the embedded video of the meeting as recorded by the Fayetteville Government Channel. If the video doesn’t load, visit accessfayetteville.org for more information.