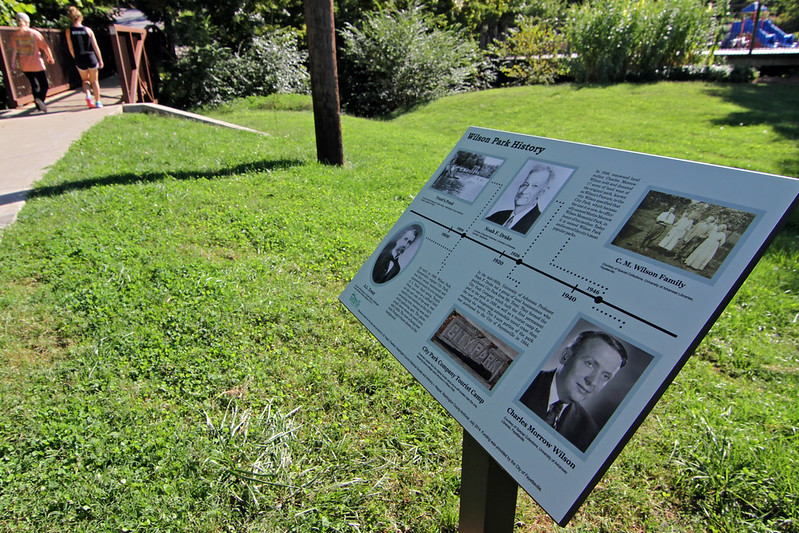 The Wilson Park history interpretive sign is located along the Wilson Park Trail on the east side of the park between the swimming pool and softball field.

A new sign depicting the history of Wilson Park was installed earlier this month.

Located in the heart of the city, the 22.5-acre park hosts a variety of activities, including walking, jogging, tennis and basketball. It features a newly renovated public swimming pool, a softball field, playground areas, and some fantastic landscaping. The park is also home to Point 7 (aka The Castle), a Fayetteville landmark designed and built by Frank Williams in the late 1970s.

While the park – the oldest in Fayetteville – is beloved by most locals, its history may not be as well known.

The interpretive sign portrays the three distinct periods of the park’s history and includes historic photos and content provided by Jerry Hogan, a local history enthusiast who serves as chair of the Historic District Commission and president of the Washington County Historical Society; and Tony Wappel, Washington County Archivist.

A ribbon cutting and celebration of the new sign is planned for 12:30 p.m. Tuesday, Sept. 30, on the east side of the park, north of Scull Creek and the pool parking lot. 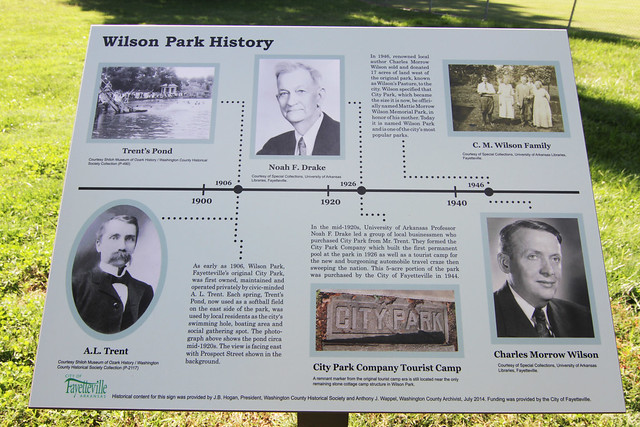 A.L. Trent / Trent’s Pond
As early as 1906, Wilson Park, Fayetteville’s original City Park, was first owned, maintained and operated privately by civic-minded A.L. Trent. Each spring, Trent’s Pond, now used as a softball field on the east side of the park, was used by local residents as the city’s swimming hole, boating area and social gathering spot. The photograph above shows the pond circa mid-1920s. The view is facing east with Prospect Street shown in the background.

Noah F. Drake / City Park Company
In the mid-1920s, University of Arkansas Professor Noah F. Drake led a group of local businessmen who purchased City Park from Mr. Trent. They formed the City Park Company which built the first permanent pool at the park in 1926 as well as a tourist camp for the new and burgeoning automobile travel craze then sweeping the nation. This 5-acre portion of the park was purchased by the City of Fayetteville in 1944.

Charles Morrow Wilson
In 1946, renowned local author Charles Morrow Wilson sold and donated 17 acres of land west of the original park, known as Wilson’s Pasture, to the city. Wilson specified that City Park, which became the size it is now, be officially named Mattie Morrow Wilson Memorial Park, in honor of his mother. Today it is named Wilson Park and is one of the city’s most popular parks.