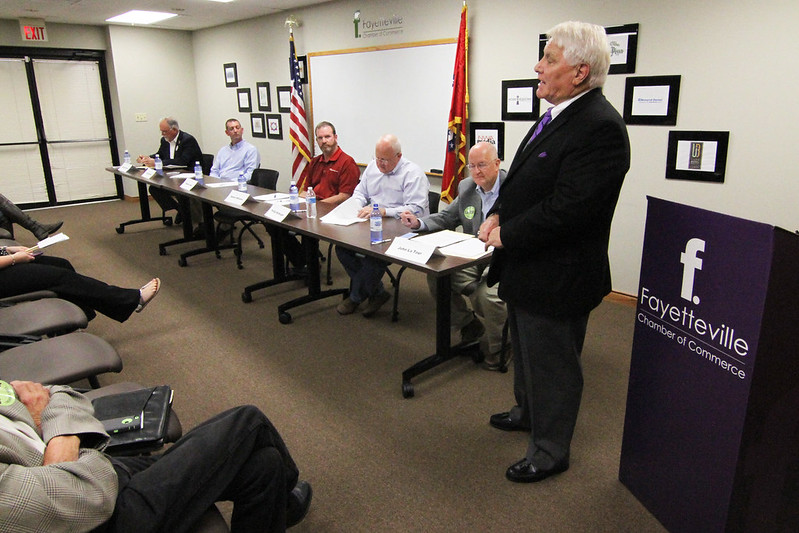 Steve Clark, president of the Fayetteville Chamber of Commerce, introduces a group of Ward 4 City Council candidates at a forum held Tuesday night inside the Chamber office near the downtown square.

About 25 residents showed up to hear Ward 4 City Council candidates answer questions about several issues during a forum held Tuesday night at the Fayetteville Chamber of Commerce.

Each candidate hopes to replace outgoing Alderwoman Rhonda Adams, who plans to move to Tampa, Fla. after serving out her term.

Here’s how the candidates answered some of the questions Tuesday night:

Should the noise ordinance be enforced equally for cars and motorcycles?

Each candidate said the law should be applied equally to all vehicles, regardless of how many wheels they have. 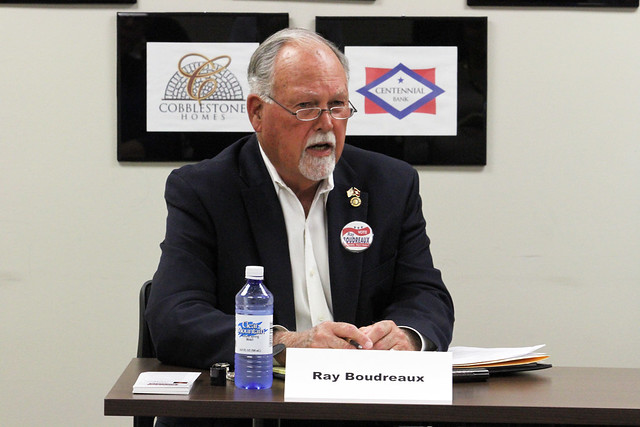 Ray Boudreaux, 70, is a retired Vietnam War veteran, and is the former director of the Fayetteville Executive Airport. He has lived in Fayetteville since 2001.

“If I can’t have a loud muffler on my old Volvo, then neither should a motorcycle,” said La Tour.

La Tour and McKnight said exceptions should be considered in some cases, including the annual Bikes, Blues & BBQ motorcycle rally, which provides a boost to the local economy each fall.

Boudreaux said it’s important for residents to remember to call the police as soon as they hear someone being too loud.

“That ordinance is complaint driven,” he said. “So if you do hear somebody exceeding the noise level, you should report it immediately.”

“The problem with the noise ordinance, the way it’s written now, it’s for high-frequency noises only, and nobody’s looked at the low end,” said Honchell.

How can Fayetteville become a more business-friendly community?

Williams and La Tour both said the city has a reputation of being unfriendly to developers because it takes much longer to receive a permit to build in Fayetteville than in other cities across the region. 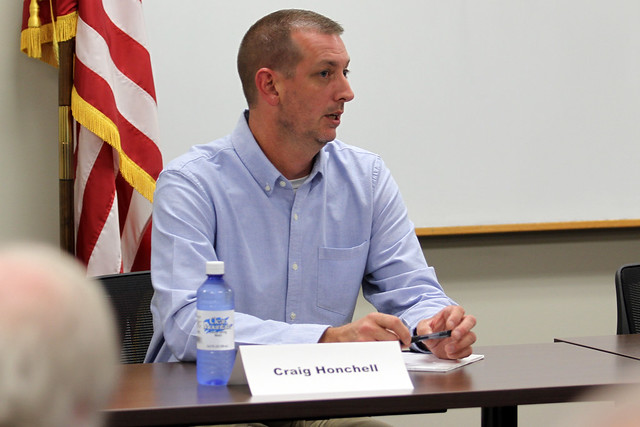 Craig Honchell, 45, is a manufacturing engineer for Bargo Engineering, and a five-year member of the Fayetteville Planning Commission. He moved to Fayetteville in 1990.

“The first thing I would do is open up the books to see how the process has worked in Bentonville, Rogers and Springdale,” said Honchell. “I’ve heard a hundred times over that (a developer) can go to Springdale and get a permit pulled and two days later have something on the ground.”

McKnight said the first step is to identify some of the real or perceived inhibitors to the growth of the business community and then address those issues one by one. After that, he said the city should develop a public relations strategy to combat the notion that Fayetteville is a difficult place to build.

Boudreaux said the city should be proactive when dealing with potential new businesses. Anticipating some of the challenges a developer might face, he said, could help planners offer alternatives to some of the city’s strict regulations.

He said that doesn’t mean lowering Fayetteville’s standards, though.

“We all in our town are for high standards,” said Boudreaux. “But we also need to recruit good business and industry, so we can create jobs for our citizens.”

Was it right to introduce a controversial civil rights ordinance based on laws passed in other cities?

McKnight said it is standard procedure for an alderman to propose legislation. 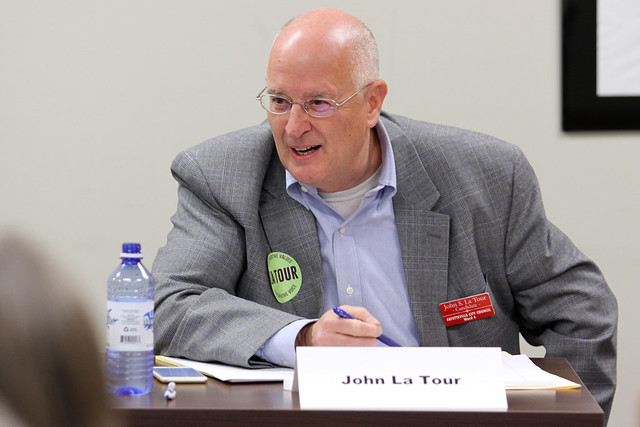 John La Tour, 58, is a local tax attorney and an active opponent of Fayetteville’s new civil rights ordinance. He has been a Fayetteville resident since 1979.

“It may not have been to everyone’s liking, but it was well within the rights of a councilman to introduce an ordinance,” said McKnight. “I don’t think there was anything that was in violation of what is done on a regular, day-to-day basis.”

“There were several gray areas with the entire ordinance and nobody quite knows where this ordinance is going to go,” Honchell said.

The ordinance prohibits business owners and landlords from unjustly firing or evicting someone because of their sexual orientation, gender identity

Williams called the process “a little bit cloudy” and said the new regulations will make business owners nervous about operating in Fayetteville.

La Tour was quick to say he would work to repeal the ordinance if voters don’t overturn the new law in a special election later this year.

“I want equal protection for everybody,” said La Tour. “But (the ordinance) goes too far, it’s overreaching, and it’s bad for business.”

Boudreaux said he was originally concerned about the ordinance, but was more comfortable after talking with City Attorney Kit Williams and after exemptions were added for religious institutions.

Does a public vote to overturn a new law undermine the role of the City Council and set a bad precedent?

All five candidates said the right to a public referendum is an important part of the democratic process. 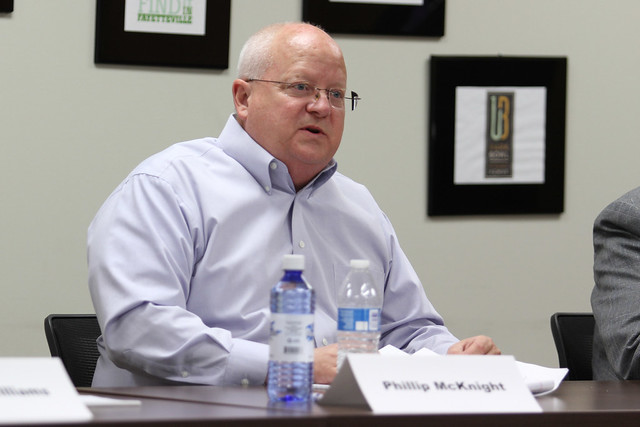 Phillip McKnight, 54, is an account manager for a national sporting goods company, who has been a member of the Fayetteville Parks and Recreation Advisory Board since 2011 and served as treasurer of the Botanical Garden of the Ozarks for six years. He’s been a Fayetteville resident since 1992.

“I don’t think it undermines the council members,” said Williams. There needs to be a means for the people to react to a decision that the City Council makes if they disagree.”

Boudreaux said the petitioners must’ve felt that their representatives didn’t vote the way they wanted them to.

“So therefore, they have not only the right, but the responsibility to bring (the ordinance) to a vote of the people,” he said.

McKnight said if anything, the referendum process serves as a reminder that aldermen should listen to their constituents, and that residents have a responsibility to communicate with their council representatives.

La Tour said he’s not worried about setting a precedent for public votes. He said mounting a campaign to overturn a law is an expensive and time-consuming process that won’t likely be engaged very often.

How can the city improve enforcement of an ordinance that outlaws more than three unrelated people living in most single-family homes, particularly in the neighborhoods surrounding the University of Arkansas campus?

McKnight and Williams both said they would push for a more active enforcement approach that’s stronger than the current complaint-driven process. 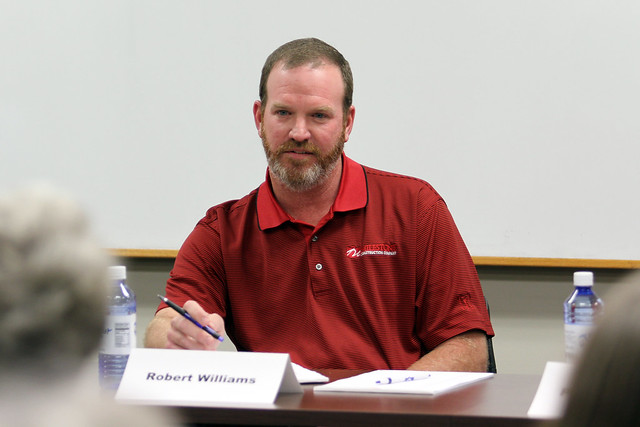 Robert Williams, 45, is a project manager with Milestone Construction in Springdale. He moved to Northwest Arkansas in 1985, and has lived in Fayetteville for the past two years.

“I know for a fact that there are a lot of people that have just absolutely given up on trying to get the city to do something about the 15 people living next to them,” McKnight said.

La Tour, who lives across the street from Razorback Stadium, disagreed and said it’s unreasonable to live close to campus and expect to be separated from students.

“Students are going to live next to campus,” he said. “That’s just the hard reality of it. If you don’t want to live next to students, move out to west Fayetteville or move to Springdale.”

Honchell said the city should consider incorporating the university into the process.

“I think we need to strengthen those ties back with the university and work at it from that angle,” said Honchell.

How should the city handle sprawl and the rapid growth in west Fayetteville?

“Growth is inevitable,” he said. “It’s just a matter of how you manage it. We can’t go backwards.”

Boudreaux said he moved to west Fayetteville specifically because of its separated subdivisions.

“It is sprawl, but it’s great sprawl,” said Boudreaux. “People like to have homes with yards and gardens and dogs.”

Boudreaux said transportation is lagging in west Fayetteville, and while improvements are coming to the Wedington Drive interchange, he’d advocate for more ways to cross Interstate 49.

McKnight said he think city planners have learned a lot of lessons about growth along Wedington Drive.

Honchell agreed and said the Wedington Corridor Plan aldermen approved last year will serve as a road map for productive expansion west of I-49.

“You’ve got to put the roads before the buildings,” Honchell said. “If you get good infrastructure in place, then you’re going to have good development behind it.”