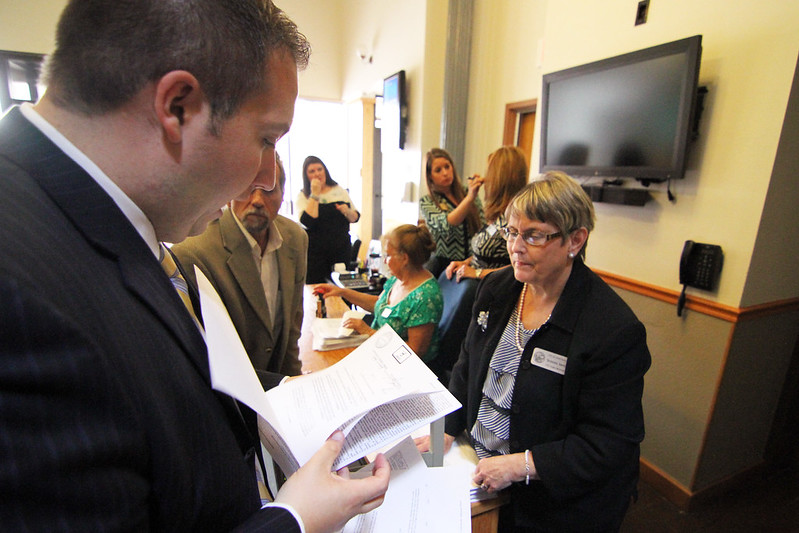 Travis Story, a lawyer with the Story Law Firm in Fayetteville, talks with City Clerk Sondra Smith after turning in 802 petitions to put a newly adopted civil rights ordinance up for a public vote.

The City Clerk’s office has certified enough signatures to trigger a public vote to uphold or overturn the anti-disrcrimination law passed by the Fayetteville City Council last month.

The ordinance prohibits business owners and landlords from unjustly firing or evicting someone because of their sexual orientation, gender identity, socioeconomic background, marital status or veteran status. It creates a civil rights administrator position to receive complaints from residents who feel they are victims of those specific types of discrimination.

Petitioners needed at least 4,095 names – or 15 percent of the residents who cast ballots in the last mayoral election – to force a special election, and to put the new law on hold.

Smith’s office stopped certifying names at around 6 p.m. Friday, Sept. 26 when enough signatures had been validated.

Smith said she eliminated duplicate signatures, and names of people who became registered after signing the petition. Petitions that weren’t properly notarized were also deemed invalid.

“We are confident, as we have been since Chapter 119 was passed by the City Council, that the residents of Fayetteville do not want Chapter 119, and today’s certification shows that the residents of Fayetteville have taken the extraordinary step to ensure that they have their voice heard on this issue at a special election,” organizers said in a statement released Friday.

It’s now up to the City Council to decide the date of the special election. State law requires a referendum to be held between 60 and 120 days after signatures are certified. Since special elections must be held on the second Tuesday of the month, the civil rights vote will take place either Dec. 9 or Jan. 13.

Aldermen would need to make a decision at their Oct. 7 meeting to give the County Clerk’s office enough time to prepare for a Dec. 9 vote.

A similar civil rights law was repealed by voters in 1998

Fayetteville voters successfully repealed a similar civil rights law that would have prohibited the city from discriminating against homosexuals when hiring or firing city employees.

A group called Citizens Aware collected enough signatures to put the proposal on the Nov. 3, 1998 ballot where it was repealed, 58 percent to 42 percent.