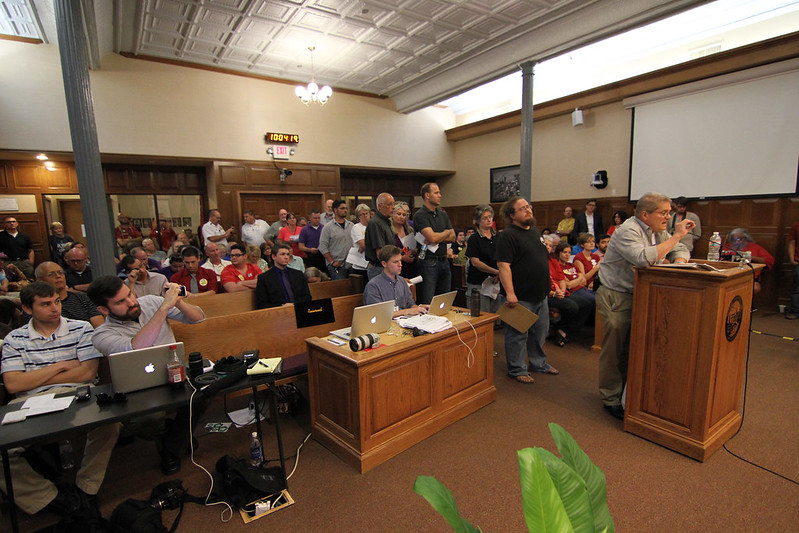 The City Council chambers were packed tight during the final reading of a contentious anti-discrimination ordinance on Aug. 19.

Fayetteville aldermen will discuss Tuesday what a “For” vote should mean in the upcoming special election to uphold or repeal a controversial anti-discrimination ordinance.

City Council members approved the Civil Rights Administration ordinance in late August, but petitioners turned in enough signatures to put the law on hold and force a special election to decide the fate of the new law.

It’s now up to the City Council to decide the date of the special election, which is expected to cost the city between $20,000 and $30,000. State law requires a referendum to be held between 60 and 120 days. Since special elections must be held on the second Tuesday of the month, the civil rights vote will take place either Dec. 9 or Jan. 13.

As part of the referendum process, aldermen must also approve the title and full text of the ballot question.

Petitioners have suggested a “For” vote be used to repeal the ordinance, but Fayetteville City Attorney Kit Williams said that could be confusing to voters.

Williams said it is more straightforward and understandable for a “For” vote to actually be a vote for the ordinance and an “Against” vote to be a vote against the ordinance.

“The ballot title should follow the form prescribed by the (Arkansas) Legislature,” said Williams in a memo sent to aldermen last week.

While the state does spell out specific rules for ballot language on county ordinances, Williams said city referendums do not have their own state statute to clearly explain exactly how a ballot should read.

“I regret that this was not expressly made applicable to municipal referendum elections,” said Williams. “However, I believe that city councils are closely analogous to county quorum courts so that the same referendum procedure for their ordinances should be applicable to both local governing bodies.”

Aldermen are set to discuss the date and ballot title during the Tuesday, Oct. 7 meeting, which begins at 5:30 p.m. inside City Hall room 219.