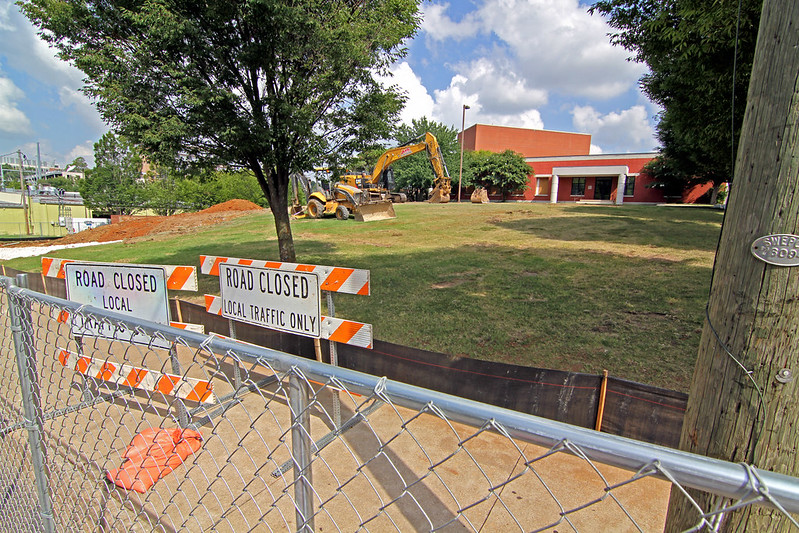 Work on a parking deck project at Spring Street and School Avenue was postponed in August after construction bids came in several million dollars over budget.

Aldermen agreed Tuesday to use $2.1 million in reserves to build a new parking deck about a block away from Dickson Street in Fayetteville.

The three-story deck, set to be constructed at the northwest corner of Spring Street and School Avenue, is expected to cost just over $12.3 million.

That’s nearly double the price officials expected to pay in 2011 when aldermen authorized a $6.2 million bond package to pay for the project.

Budget problems cropped up in April when an increase in labor costs and concrete materials helped contribute to a nearly $2 million expected overage. Changes to design specifications lowered costs by about $800,000, but the gap swelled to around $5.3 million when initial bids were opened in late August.

Since then, the city’s design team has identified about $1.6 million in savings through more specification changes, negotiations with sub-contractors, and having city crews do some of the work.

The city will use $1.5 million that the Walton Arts Center returned as part of its governance change agreement for the project, and then fill the gap using reserve funds.

With $11 million in reserve – $6 million of which must be kept to cover two months worth of operating expenses in case of an emergency – the city will be left with about $2.9 million. A report by the University of Arkansas Community Design Center shows four scenarios that could be used to redevelop the parking lot across from the Walton Arts Center to transform the property into a mixed-use cultural hub once a new parking deck is built. (See full report)

Alderman Matthew Petty said while spending money from reserves is a tough pill to swallow, he believes building the deck is paramount if the city is to realize the potential for development in the entertainment district.

“Whenever looking at this deck project, I think we need to think about what it enables us to do next,” said Petty.

He pointed to a recent University of Arkansas Community Design Center report (PDF) that reimagined the main parking lot west of the Walton Arts Center as mixed use cultural hub. The project outlined several scenarios for how the property could be redeveloped with housing and retail that complements the forthcoming renovation of the Walton Arts Center and expansion of the Fayetteville Public Library.

Petty said the idea hinges upon building a new parking deck to make up for any loss of parking in the main WAC lot once it’s redeveloped.

Councilwoman Marsh agreed, and said there are other reasons to look ahead.

“I think it’s important that we take the long view and realize we’re constructing a building that will hopefully stand in our downtown for 100-plus years,” said Marsh. “It’s important that we do make wise decisions from a budgetary perspective, but it’s also important that we not cut corners because this is going to be an important part of our streetscape for beyond my lifetime and everyone’s lifetime in this room.”

Alderman Justin Tennant was the only council member to vote against using general reserves to pay for the budget overage.

He said the money could be put to better use by giving raises to firefighters or hiring employees to fill city jobs that have been frozen for several years.

Alderman Kinion said while he’s normally a fiscal conservative, he felt more comfortable spending reserves on a one-time expenditure than for employee raises that would require annual funding.

Plus, Kinion said it’s possible the reserve could be at least partially replenished using revenue generated from the redevelopment of the main WAC lot as envisioned in the UA Community Design Center’s plan.

Jeremy Pate, the city’s Development Services director and manager of the parking deck project, said it’s possible that work on the deck – which was put on hold in late August – could resume by the end of the month. He estimated construction of the deck to be complete by late 2015.