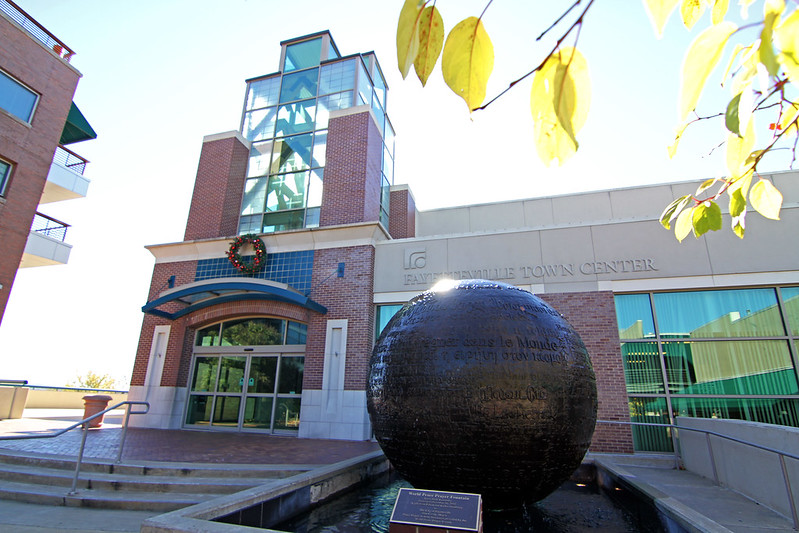 The Fayetteville Town Center is one of several facilities overseen by the Advertising and Promotion Commission.

Fayetteville Chamber of Commerce president Steve Clark said he wants the chamber to run the Advertising and Promotion Commission when longtime executive director Marilyn Heifner steps down in January.

Commissioners are set to narrow the field of applicants for the job at their next meeting on Monday, Nov. 10, and Clark said he hopes the chamber is one of the finalists.

Clark said he knows a contract with the chamber would be out of the ordinary for Fayetteville, but noted two nearby cities that have partnerships similar to his proposal. Rogers Mayor Greg Hines said the partnership between the chamber and commission is a successful model.

“There are many benefits to this set up, not the least of which being the added credibility and accountability it provides to the public,” Hines wrote in a letter (PDF) supporting Clark’s proposal.

The Fayetteville chamber currently contracts with the City of Fayetteville to provide economic development services for $150,000 per year. As part of that contract, the chamber fields all inquiries from businesses that are considering setting up shop or expanding into Fayetteville.

Clark said the combined efforts of the chamber and commission would present more opportunities for economic development and HMR revenue growth in Fayetteville.

“The programs established by the commission and its team have been outstanding,” Clark wrote in a recent memo (PDF) to commissioners. “Yet, there are always new and different opportunities to consider that may achieve even greater results.”

Clark suggested a focus on international tourism using the chamber’s relationship with Visit USA programs in Panama and Columbia; a recruitment program for out-of-town visitors centered around University of Arkansas and Fayetteville High School athletics; and a partnership with the smaller neighboring cities to establish a regional sports authority that host events and tournaments in Fayetteville.

In his proposal, Clark suggested a $1 annual contract between the chamber and the commission beginning Jan. 1, 2015 and lasting one year.

The chamber would manage commission staff, operations, programs and budgeting, but all contractual commitments would still require approval during a vote of the seven-member commission.

Clark said all current staffing levels would remain unchanged during the first year, including positions at the Visitors Bureau, Town Center and Clinton House Museum.

The A&P Commission is funded through the city’s 2 percent HMR tax added to hotel, motel and restaurant sales inside Fayetteville. The tax is split equally between the commission and the city’s Parks and Recreation Department which uses its portion of the funds for parks maintenance, operations and capital improvements. Each side last year collected about $2.6 million.