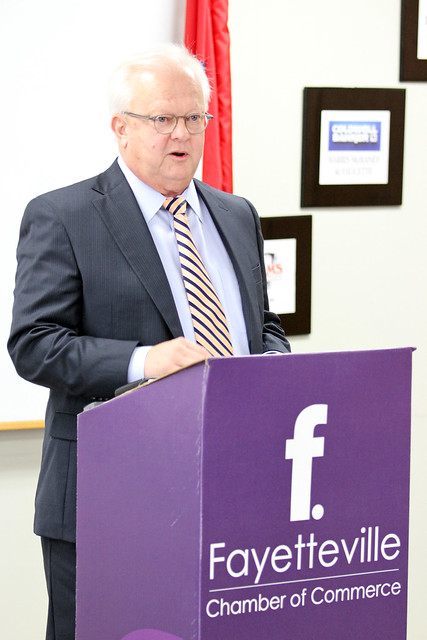 Bill Bradley, chair of the Fayetteville Chamber of Commerce Board of Directors, speaks Friday.

The Fayetteville Chamber of Commerce has officially called for a repeal of a new law that would prohibit business owners and landlords from unjustly firing or evicting someone because of their sexual orientation, gender identity, socioeconomic background, marital status or veteran status.

The Civil Rights Administrator ordinance would also create a staff position to receive, investigate, and sometimes mediate complaints from residents who feel they are victims of discrimination.

The new law was passed by the City Council in August, but a group called Repeal 119 gathered enough signatures to put the ordinance on hold and force a Dec. 9 special election to determine the fate of the ordinance.

The ordinance was met with open arms from local minorities, but the law found opposition from a variety of residents, including many who said that discrimination is not a problem in Fayetteville, and that the city is already a fair-minded place.

Nearly 20 people who spoke at the City Council meeting the night the law was passed recounted personal stories where they felt discriminated against by business owners and landlords around town. Some said they were fired for being gay, and others said they live in fear that their landlords will find out they’re homosexuals and stop renting to them.

The chamber held a press conference Friday to announce its board had unanimously adopted a resolution calling for the repeal of the ordinance, and that their hope is that voters will strike down the civil rights law at the polls next month.

Board members said they felt the ordinance was written poorly and is too vague in its definition of what is prohibited.

Those sentiments echo what some landlords have said when criticizing new law.

Sue Madison, a local landlord and former Arkansas state representative and senator, said a better definition of “socioeconomic background” was needed to ensure there is no ambiguity over what is prohibited. She said the new law could be interpreted to mean landlords or banks no longer have the right to request a credit check. Williams said landlords and banks have legitimate reasons for needing to know if someone can afford their rent or loan payment. He said nobody would be in violation of the ordinance for using a credit check, requesting a pay stub, or otherwise asking for proof of ability to pay and then relying on that evidence to decide whether to loan money, extend credit, or agree to rent to an individual.

Chamber members listed a handful of other technical objections before presenting its conclusion in an embargoed press release issued Thursday:

The chamber submits to voters that it is never good public policy for any governmental entity to adopt rules, regulations, ordinances or laws that are vague, incomplete, fail to include critical definitions for prohibited acts or conduct that may be [sic] later be adjudged as criminal; base criminal prosecution on the basis of another’s “perception” of conduct, verbal or non verbal communication or attitude or that have not been completely and thoroughly debated and reviewed.

Keep Fayetteville Fair, an advocacy group working to support the ordinance, issued a statement Friday morning announcing disappointment in the chamber’s decision to take an opposing stand on the divisive issue, and said the move was “out of step” with many of the most successful companies operating across the country today.

The group pointed out a recently released study by the Human Rights Campaign Foundation which found that 91 percent of Fortune 500 companies have implemented policies which prohibit discrimination on the basis of sexual orientation, and 61 percent have protections in place on the basis of gender identity.

“Companies across the United States, a great number of which operate here in Arkansas, including Walmart, have embraced anti-discrimination protections and have encountered no problems,” said Anne Shelley, spokesperson for Keep Fayetteville Fair.

Keep Fayetteville Fair believes a vote against the repeal will allow our city to uphold our values and faith, which teaches us we’re all God’s children and that everyone should be treated with respect. The supporters of Keep Fayetteville Fair believe all folks who work hard, pay their taxes, serve in our military, and contribute to our community deserve to be treated fairly under law, including our gay and transgender neighbors.

Supporters maintained that regardless of whether the new law needs to be fine-tuned, its intent is clear and must be upheld.