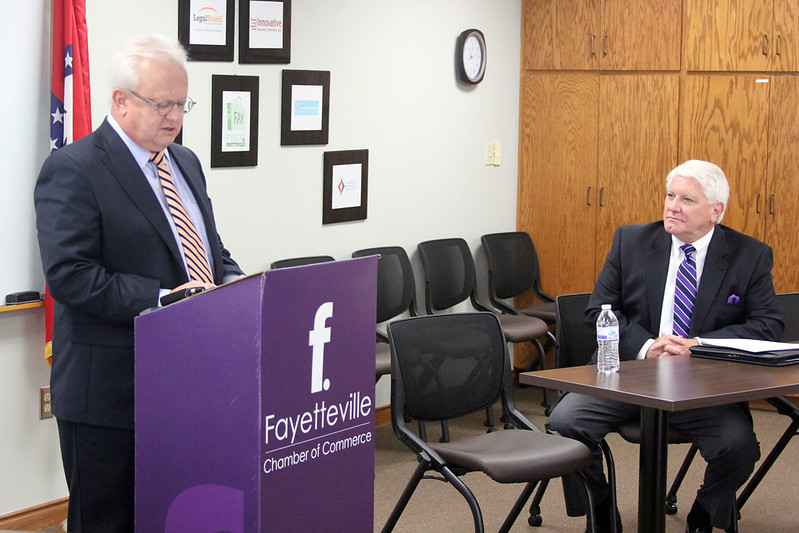 Bill Bradley (left), chair of the Fayetteville Chamber of Commerce’s board of directors, speaks during a Friday morning press conference alongside chamber president Steve Clark.

Officials with the Fayetteville Chamber of Commerce held a press conference Friday morning to announce a call for repeal of the city’s contentious new civil rights ordinance.

The Civil Rights Administrator ordinance, if upheld in a Dec. 9 special election, would prohibit business owners and landlords from unjustly firing or evicting someone because of their sexual orientation, gender identity, socioeconomic background, marital status, or veteran status.

Bill Bradley, chair of the chamber and president of Washington Regional Medical Center, read a prepared statement to begin the press conference.

“As an organization, the chamber takes public positions on governmental policy only when it believes that the policy is detrimental to the community because it is legally incomplete, vague, or deficient in defining conduct to be regulated as legal or illegal,” said Bradley. “In that light, our board unanimously adopted a resolution calling for the repeal of Ordinance 5703, Chapter 119.”

Bradley said the chamber will soon begin a campaign to recommend to both its members and the public the repeal of the ordinance in hopes that the civil rights ordinance is struck down at the polls in December.

He said the chamber “abhors discrimination of every kind and supports equal treatment for all” and maintained that their opposition to the ordinance was focused solely on a list of technical flaws in the way the law is written.

Bradley said the chamber believes the law criminalizes civil conduct; does not provide an adequate definition of what prohibited conduct will give rise to criminal prosecution; does not define critical terms such as, socio-economic background and physical characteristic nor how these terms apply regarding discriminatory acts or classes under the ordinance; does not include any current legal defenses under Arkansas or federal law now available to any one alleged to have discriminated; and does not define “perception” which can be the basis of a complaint from one believed to be a victim of discrimination.

He called the ordinance “incomplete and vague” and said it was not adopted with enough review and debate.

Clark was asked if the chamber’s entire board of directors was present during the unanimous vote to support repeal of the ordinance. He said not all 17 of the board’s members were in attendance, but did not say which members were absent. He stressed that there are two types of members – those who vote and a group of ex-officio members who are not asked to vote.

He said the board has discussed its opposition to the ordinance for about three months.

“It’s not like this is something that happened in the last 7 to 14 days,” said Clark.

He was also asked what he would say to business owners who are considering withdrawing their membership because of the chamber’s recent public opposition to the ordinance.

“That’s certainly their prerogative,” said Clark. “We’re not trying to dictate to anyone their beliefs or their philosophy.”

He said while two business owners did come in early Friday before the press conference to cancel their membership, there were another two businesses whose owners called to inquire about joining the chamber because they were happy with the board’s decision. When asked, Clark said he was surprised to hear Alderman Mark Kinion would be returning a $250 donation the chamber had made to his re-election campaign last month.

Kinion, who was re-elected to a second four-year term in the Nov. 4 general election, was one of two aldermen who received endorsements and contributions from the chamber this election season. The chamber also donated $250 to incumbent Alderwoman Adella Gray, who faces Paul Phaneuf in a Nov. 25 runoff election.

Both Kinion and Gray voted in favor of the civil rights ordinance.

Kinion said announced Friday he would be returning the donation specifically because of the chamber’s decision to oppose the proposed law.

“I appreciate the kind endorsement of the Chamber of Commerce but I am returning their contribution to my re-election campaign as a matter of principle and personal integrity,” wrote Kinion in a Facebook post early Friday.

Kinion, who gave a heartfelt speech at the Aug. 19 City Council meeting, acknowledged that the ordinance might need to be fine-tuned, but said after hearing an outpouring of stories from residents who’ve felt discriminated against in Fayetteville, the time to enact the new law is now.

“We must step forward bravely and with immediacy,” Kinion told the audience. “We must admit that there is the possibility of an unsafe environment for individuals here. It is our responsibility as elected officials to look out for those minorities who cannot fight for themselves.”

Clark said Kinion knew about the possibility of the chamber’s public opposition to the ordinance before he accepted the donation.

“He was given that information so he could make a decision knowing those facts as to whether he wanted our endorsement and our contribution,” said Clark.

Kinion said Friday while he did meet with Clark before the endorsement, he was told that nothing was set in stone.

“There is a difference between saying you may come out against something and actually going through with it,” said Kinion.

He noted that up until this week, the chamber had made no official statement on either side of the ordinance, and instead waited until after the election to come out against the proposed law.

Kinion said he’d hoped the chamber’s endorsement was a sign that the board might not choose to publicly denounce the ordinance, especially knowing his strong feelings about equal rights.

“I was so sad that they went through with this,” said Kinion. “I thought they endorsed my re-election based on my record. Not once have I ever been hypocritical about my beliefs about this ordinance. The chamber knew exactly how I felt and they chose to endorse me. I guess it was a leap of faith on my part.”

Kinion said he holds no ill will against the chamber, and added he plans to attend future meetings at the organization.

“My apologies to my good friends that are employees of the chamber if this seems unkind,” Kinion wrote in a Facebook post early Friday. “I know you work hard in your areas of expertise bringing valuable programs and services to the business community. I love each and every one of you and totally respect your dedication.”