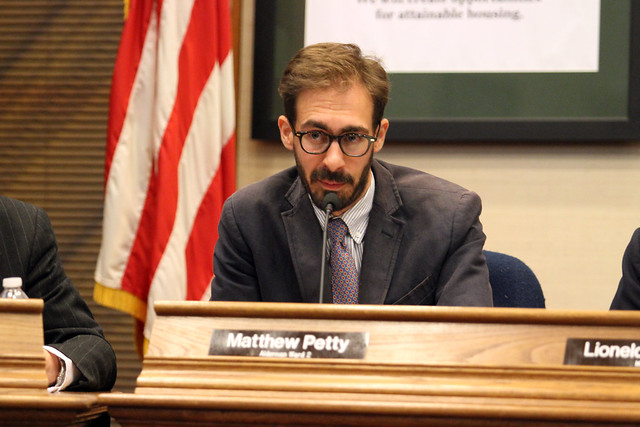 What began as a City Council discussion Tuesday about amendments to Fayetteville’s Civil Rights Administration ordinance quickly spiraled into an argument about whether the ordinance should be repealed on the spot.

Alderman Matthew Petty, who originally sponsored the ordinance, said he wanted to clear up two issues (see PDF) people have with the new law if it’s upheld by voters in the Dec. 9 special election.

The first amendment would define the term “socioeconomic background” and how it differs from “socioeconomic status.” The second would remove a reference to “physical characteristic” that Petty and City Attorney Kit Williams said was supposed to have been deleted in the final draft of the ordinance before it was approved.

Socioeconomic background is one of several characteristic protections listed in the anti-discrimination ordinance along with sexual orientation, gender identity, marital status, and veteran status. The new law prohibits business owners and landlords from unjustly firing or evicting someone because of any of those characteristics.

Opponents of the ordinance have argued that socioeconomic protections would prevent a bank or landlord from running a credit check on a potential client, but the city attorney has said on many occasions that’s not true. In an advisory committee meeting hosted by Mayor Lioneld Jordan in early September, Williams said nobody would be in violation of the ordinance for using a credit check, requesting a pay stub, or otherwise asking for proof of ability to pay and then relying on that evidence to decide whether to loan money, extend credit, or agree to rent to an individual. What the new law prohibits, he said, is discriminating against someone based on their long ago socioeconomic roots. In other words, someone cannot be discriminated against because they grew up “on the wrong side of the tracks” or because they once lived in public housing even though they now have a steady job and a good credit score.

The reference to “physical characteristic,” according to Petty and Williams, is a scrivener’s (or clerical) error, and was left in the ordinance by mistake. Williams said in the same September panel discussion that aldermen did not want to include the reference in the final draft of the law, and that he meant to delete it before the Aug. 19-20 City Council meeting, but overlooked its removal and didn’t notice until after the ordinance had passed.

“The reason I brought this forward is because I think there is some common ground that was discovered at the mayor’s advisory committee and I just wanted to make clear the council’s acknowledgement of that common ground…and make clear our intention to take action where there is common ground,” said Petty on Tuesday.

“This is already a good law, but its supporters recognize that no human effort is ever perfect,” said Smith. “Tonight’s promise to correct clerical errors and the definitions that were missing shows that local government really is responsive to citizen needs and shows the council’s dedication to working with the people of Fayetteville to address their legitimate concerns.” 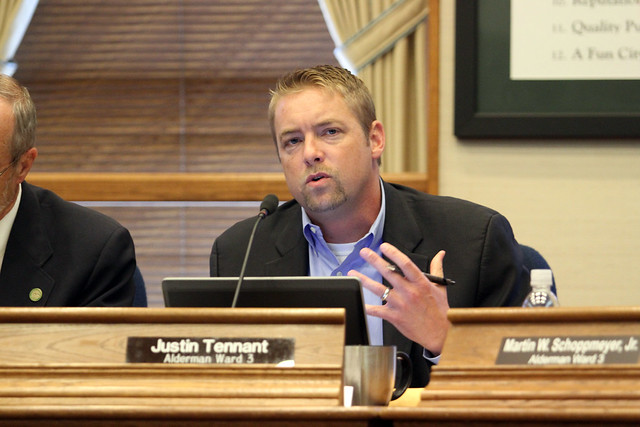 Both amendments were approved unanimously, but not before a debate broke out between aldermen about whether the ordinance should be repealed right then and there.

Ward 3 Alderman Justin Tennant, who was one of two council members to originally oppose the civil rights law, said he supported Petty’s proposal, but added that there were other flaws with the ordinance that were pointed out in the mayor’s advisory committee meeting in September.

He read from a list of issues he has with the ordinance, including the lack of a specific procedural process for lodging a complaint, probable cause determinations, and the criminal versus civil penalties that would be imposed on violators.

“If this ordinance has this many flaws and more unknown flaws, I would suggest we repeal it tonight,” said Tennant, who suggested the council immediately begin drafting a new ordinance using input from opponents of the law. “That’s a novel concept, to actually listen to people who might disagree with you.”

Some of Tennant’s remarks were visibly upsetting to some council members, particularly Ward 4 Alderwoman Rhonda Adams, who said she logged 486 phone calls from residents during the six-week period from July 7 to Aug. 19 when aldermen were considering the ordinance.

“I feel like I listened to lots and lots of people before I voted,” said Adams.

“I really resent anyone saying that I have not listened to the public,” said Gray, who added that she’d logged over 600 phone calls from residents in Ward 1, most of whom she said were in favor of the civil rights ordinance.

Gray said Tuesday night’s proposal was following through on a promise she made when voting for the passage of the ordinance.

“I said on Aug. 19 that we possibly will need to amend it,” Gray said. “This is what we’re doing tonight and this is what we will continue to do until we get the kinks worked out.”

Petty said many of Tennant’s claims are simply not true.

“If you look at some of the claims, for instance, that the burden is on the accused or that the requirement for probable cause was removed,” said Petty, “those are just made up claims.”

Ward 4 Alderman Alan Long said it would be disrespectful to residents on both sides of the issue – especially to the more than 4,200 residents who signed a petition seeking a public vote – to repeal the ordinance at this point.

Adams, Gray, Kinion, Long, and Petty voted against Tennant’s motion. Ward 3 Alderman Martin Schoppmeyer and Tennant both voted in favor of it. Ward 1 Alderwoman Sarah Marsh was not present at Tuesday’s meeting.