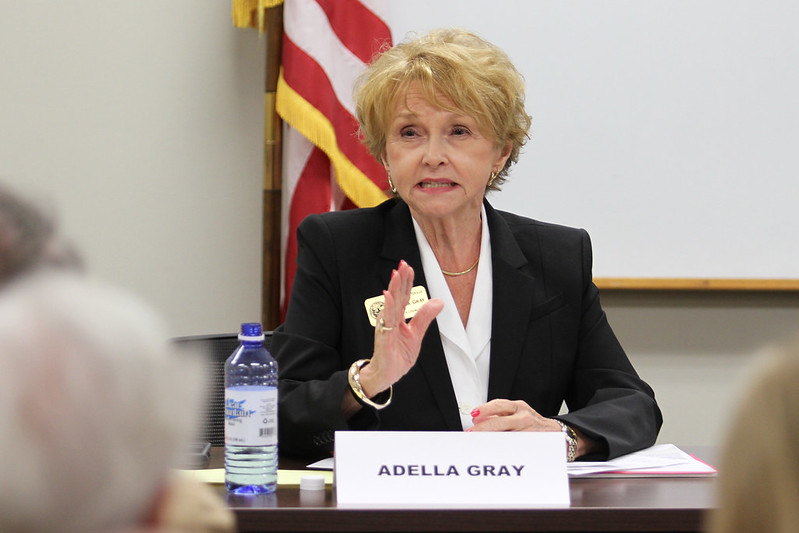 “It is a great day for Fayetteville,” Gray said Tuesday night. “I want to thank all the citizens who have supported me and helped me to get re-elected today. I am truly honored to continue to represent the city of Fayetteville and especially Ward 1.”

Davis-Gutierrez immediately endorsed Gray after the election results were announced on Nov. 4.

“I so appreciate (Davis-Gutierrez’) backing as I moved into this runoff election,” Gray said. “I look forward to working with Sonia in the future and to know that by working together we can make Fayetteville a better place.”

Gray was elected to the council in 2006, and is the longest active member of the group. The 74-year-old retiree said her experience and “institutional memory” is what sets her apart from other aldermen.

“This diverse city needs a diverse City Council and I bring an age diversity that is important to have represented,” said Gray.

During her time in office, Gray voted in support of several major projects including a new parking deck near Dickson Street, a planned 200-acre regional park in southeast Fayetteville, the recently opened flyover bridge, and the purchase of 328 acres of woodland tucked away on Mount Kessler.

“It has been a very productive period, but there is always more work to be done,” she said.

In her third term Gray said she’ll work to expand the city’s recycling program to more apartments and businesses, and push for more “cutting-edge” legislation, like the streamside protection ordinance and the recent creation of the state’s first energy improvement district.

“These new laws have had my full support – not only because my constituents supported these pieces of legislation, but because it was the right thing to do,” she said. “I will always welcome such progressive ideas while being careful not to over extend our staff and our budget.”

Gray was one of six council members to vote in favor of Fayetteville’s civil rights ordinance, which prohibits discrimination against someone for being gay, transgender and other characteristics. Phaneuf, however, was one of the most vocal opponents of the new law.

“I want to thank my opponent Paul Phaneuf for helping to bring some issues forward so that citizens could have a choice and vote for a direction they want to see their council representative to go,” Gray said.

Gray ran unopposed in Ward 1 during the 2010 general election, and narrowly defeated Richard Osborne in 2006. She challenged Rep. Charlie Collins, R-Fayetteville for the Arkansas House District 84 seat in 2012, but lost the race with 46 percent of the votes.

“Fayetteville is inclusive of all, and that is so exciting. Our ward citizenry wants council members who are engaged, who are studied, and who bring experience to the council and the discussion. They want a council member who listens and responds to citizen inquiries and a council member who understands that every decision can impact the quality of life and economic vitality of our wonderful city.”