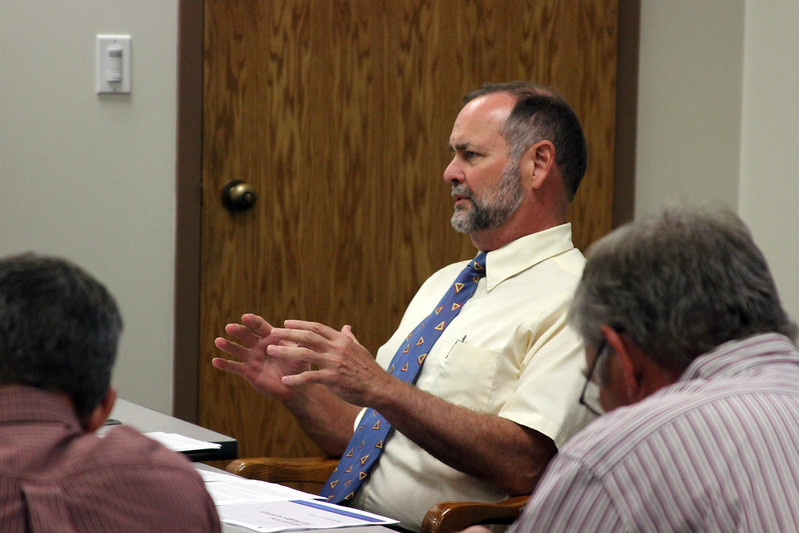 Williams said the new law would be much shorter, more focused, and clearer than the version which was based on draft language provided by the Human Rights Campaign.

“I believe that Fayetteville should draft its own anti-discrimination ordinance,” said Williams, who suggested language based on the Arkansas Civil Rights Act of 1993.

“In place for over 20 years, the definitions and provisions of the Arkansas Civil Rights Act should now be well known, accepted and understood,” Williams said. “I believe it is a preferable model than one received from a Washington, D.C. special interest group.”

The Arkansas Civil Rights Act prohibits discrimination in employment, property transactions, and places of public accommodation on the basis of race, ethnicity, national origin, age, sex, religion and disability. It does not offer protections based on sexual orientation, which is where Williams’ suggested ordinance comes into play.

According to his proposal, it would be against city code for a business owner or landlord to fire or evict someone simply for being gay. It would also be a violation to discriminate in public facilities.

Just like the Arkansas Civil Rights Act, Williams defines an “employer” as a business with nine or more employees, instead of five as defined in the repealed ordinance.

His definition of “public accommodation” also mirrors state law which includes “any place, store, or other establishment, either licensed or unlicensed, that supplies accommodations, goods, or services to the general public.” There are some exceptions, however.

The law would not apply to establishments with fewer than five rooms for rent and whose owners live on site. Private clubs and churches (including church-owned schools and daycare centers) would also be exempted.

Unlike the ordinance repealed by voters, Williams’ proposal does not include “gender identity” as a protected class. He said that’s because he believes transgender residents are currently protected by the federal Civil Rights Act of 1964.

While federal law does not use the term “gender identity” in defining protected classes, Williams said recent case law indicates discrimination against a transgender resident is considered “gender stereotyping,” a form of sex discrimination.

According to a 2012 U.S. Equal Employment Opportunity Commission ruling, an employer who discriminates against an employee or applicant on the basis of the person’s gender identity is violating the prohibition on sex discrimination contained in Title VII of the Civil Rights Act of 1964.

Finally, Williams’ proposal would not create a civil rights administrator position to receive and investigate complaints from residents who feel they are victims of those specific types of discrimination. It would instead require mediation, which, if unsuccessful, could lead to the violator losing their business license.

Williams said with the repeal vote being so close (voters struck down the law 52 percent to 48 percent), the city would be best served by a replacement ordinance that is accepted and endorsed by a large consensus. That, he said, will require language that is closely directed at the specific issue at hand, which is addressing discrimination against gay and lesbian residents.

“An ordinance should be ‘laser-focused’ on the real problem,” said Williams, “rather than too broadly applicable which is comparable to firing a shotgun into the cloud of issues which can create confusion, conflicting laws and unintended consequences.”

Alderman Matthew Petty, the sponsor of the original Civil Rights Administration ordinance, said he questioned whether transgender residents are indeed a protected class under federal law, but called Williams’ proposal “a great framework” to begin discussion of a new anti-discrimination ordinance.

“I’m very disappointed that our original ordinance was repealed,” said Petty. “But we have to compromise.”

Petty sent an email to Mayor Lioneld Jordan last week that included a list of possible amendments to the repealed ordinance, but said Monday he agreed with Williams’ suggestion to draft a brand new law.

Petty said while he wished Williams’ proposal specifically mentioned “gender identity” as a guarantee for transgender residents, he supports adding any protections for members of the LGBT community who are victims of discrimination, a problem he said is very real here.

Williams said it is indeed a mistake to assume discrimination does not exist in Fayetteville.

“As a heterosexual who does not discriminate against homosexuals, I assumed there really was not a problem with discrimination against gay or lesbian people in Fayetteville before the marathon City Council meeting opened my eyes,” said Williams. “Fayetteville is a wonderfully tolerant and accepting city, but for the rare occasions when the sting of discrimination lashes out against our gay and lesbian friends, neighbors, and co-workers, we should have a simpie and straightforward ordinance that places Fayetteville on the side of equality, justice, love and inclusion.”