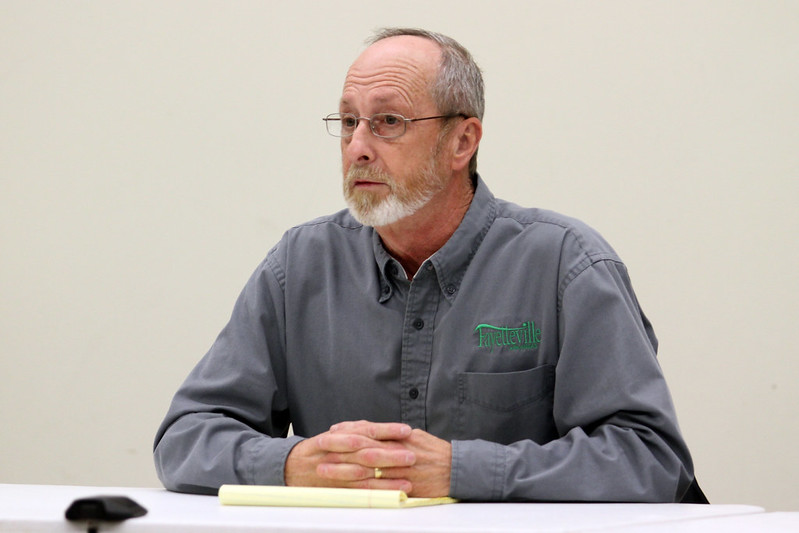 About 35 people attended the event to hear Jordan and several department directors discuss what’s been happening in the city over the past few months.

Pate said over 1,200 truckloads of dirt were removed from the deck site during the first phase of the $10.9 million construction project. The next step is to finish drilling 44 pier holes which will eventually be filled with rebar and concrete. Drilling work, Pate said, is slightly ahead of schedule and on track to be finished by Christmas.

Pate said there were no unexpected rock formations or voids found in the bedrock under the construction site. Underground voids can sometimes complicate projects by requiring additional engineering and construction work. The Washington County Courthouse parking deck project suffered a nearly $2 million cost overrun because of unexpected underground voids.

Pate said the downtown deck is expected to be completed by October 2015.

Chris Brown, city engineer, discussed a few transportation bond program projects that are under way in Fayetteville, including a realignment and extension of Van Asche Drive between Garland and Gregg avenues, and the widening of Huntsville Road.

Upcoming city and state street projects include the widening of Razorback Road from King Boulevard to Leroy Pond Drive; sidewalk and bike lane construction along Zion Road between Crossover Road and Vantage Drive; and the restoration of two historic bridges on Maple and Lafayette streets.

The $27.7 million park will be built in several phases. The first phase will include soccer fields, baseball diamonds, a “great lawn,” and general park infrastructure like streets, parking lots and utilities. Other phases call for more baseball fields, basketball courts, softball fields, sand volleyball courts, a large pavilion, trails, and a playground. A disc golf course, a community amphitheater and some type of water feature – like a splash pad – could follow.

Edmonston said phase one construction will begin in March 2015 and could take 14 to 16 months to complete.

Terry Gulley, transportation services director, gave a brief presentation on the city’s snow and ice preparedness program in anticipation of colder weather in the coming months.

Gulley explained the process by which the city creates salt brine from a generator that can produce several thousand pounds of brine each hour. The material is then transferred to one of two types of trucks which are fitted with a brine tank to be sprayed onto the streets when ice accumulation is expected. That process, he said, is only possible if no rain falls and washes the brine off the road surface before snowfall occurs.

Gulley also gave an overview of the transportation department’s fleet of snow and ice removal trucks and equipment, including front plows, belly plows, and spreader trucks.

Paul Becker, finance director, gave an overview of the various funds that make up the overall city budget. Becker explained that the two largest funds are the water/sewer fund and the general fund. He said about 33 percent of the total budget is made up of personnel costs, and 15 percent is for capital costs.

Becker said a good way to track the health of the city’s finances is to monitor the monthly sales tax reports as sales tax revenue makes up about 60 percent of the general fund. He said Fayetteville is down slightly from expected sales tax revenues in 2014, but unexpected increases in building permits and other revenue sources will likely help make up the difference by the end of the year.

The system, which was implemented earlier this year, is designed to notify residents about tornadoes, severe thunderstorms, flash flooding and other emergencies. The free service also provides non-emergency updates with information about street closures, sidewalk repairs, trash collection delays and community events.

Smith said residents can expect to see an updated city website, complete with a new content management system, by spring 2015. 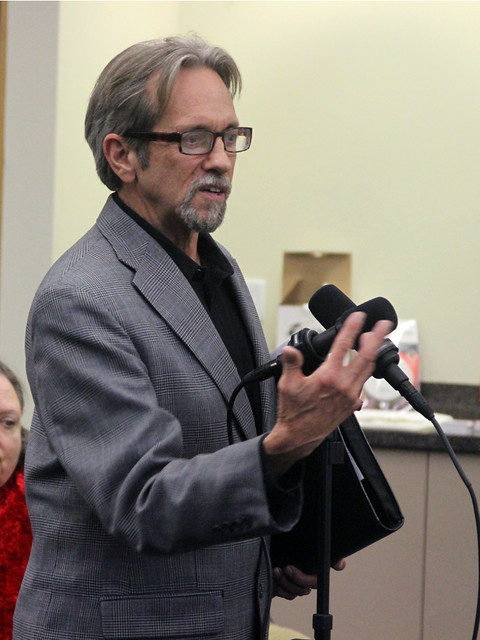 Duncan Campbell, president of Repeal 119, speaks during the public comment portion of the town hall meeting on Monday.

She also gave a shout out to Fritz Gisler, the city’s director of media services, and Douglas Bankston, video production technician, for winning a regional Emmy for best PSA at the 38th edition of the annual awards ceremony, presented by the Mid-America chapter of the National Academy of Television Arts and Sciences.

Two residents who spoke during the public comment portion of the meeting mentioned Monday’s news that Fayetteville City Attorney Kit Williams plans to introduce a new anti-discrimination law to replace the ordinance voters repealed on Dec. 9.

Duncan Campbell, president of Repeal 119, said he hopes there will be no formal discussion of a new civil rights law until next year at the earliest.

His comments echoed a memo delivered to City Hall on Monday urging aldermen to take a break from the issue.

“Give the citizens of Fayetteville a rest,” said Campbell. “It’s time to enjoy the holidays, not talk about more ordinances.”

Campbell said Repeal 119 would like to meet with Mayor Jordan and the City Council to talk “not necessarily about an ordinance, but about issues.”

Jordan invited Campbell and any Repeal 119 members to meet with him whenever they’re ready.

“I know everybody is tired,” said Jordan. “But I think that reasonable people are always going to find a reasonable way forward.”