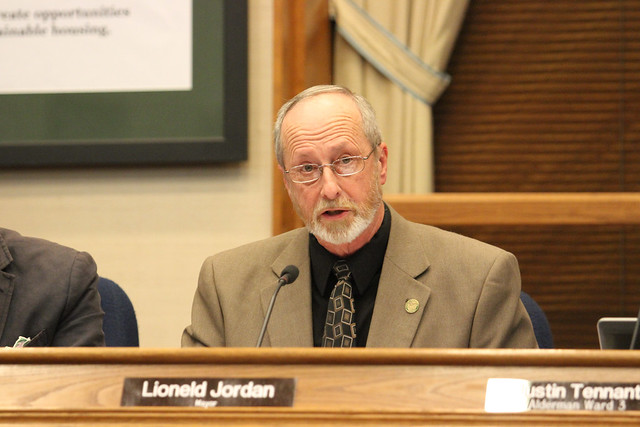 Fayetteville Mayor Lioneld Jordan delivered his annual state of the city address before the City Council meeting on Tuesday.

“I am proud to report tonight that the state of our city is sound,” said Jordan.

Jordan highlighted a list of honors and recognitions the city received in 2014, including an Emmy award for Best Public Service Announcement; five Bloom Awards from American in Bloom; designation as a Tree City USA Community of the Year for the sixth year in a row; and several recognitions from national publications.

Despite a 10.5 percent increase in Fayetteville Fire Department service calls in 2014, the Insurance Services Office (ISO) recently increased the department’s Public Protection Classification rating from Class 4 to Class 2. The rating is the common standard most insurance companies use to establish fire insurance premiums. Ratings are based on a 1-10 scale, with 10 being nearly no fire protection at all, and 1 being the best coverage possible.

“This means not only greater safety, but also lower property insurance premiums for businesses and property owners,” Jordan said.

Jordan said the Fayetteville Police Department worked with District Judge David Stewart on a order that allowed officers to utilize discretion as to whether a physical arrest is made for most Class A misdemeanor offenses. The program, he said, has reduced administrative paperwork, which helps keep officers on the street and lowers taxpayer-funded booking fees.

He also mentioned the city’s emergency alert system, which launched in April in an effort to better notify residents about tornadoes, severe thunderstorms, flash flooding and other emergencies. Still, he said there are a number of new economic development initiatives on tap for 2015, including a survey of business owners to determine any necessary changes in the city’s development requirements, and planned changes to encourage existing vacant commercial buildings to be utilized for small-scale, light manufacturing businesses like microbreweries, wineries, distilleries, and coffee roasting facilities.

Jordan listed several infrastructure improvement projects that began or were completed in 2014, including the College Avenue flyover bridge, the widening of Garland Avenue, and upcoming widening projects on Van Asche Drive, Razorback Road, and Huntsville Road.

The city also secured design approval for the restoration of the historic bridges on Maple and Lafayette streets, and began design for improvements along Rupple and Zion roads.

Jordan said residents can expect to see a number of new improvement projects begin in 2015, like median trees planted on Crossover Road and Garland Avenue; enhancements to College Avenue north of Maple Street; and a new traffic signal at Mission Boulevard and Old Wire Road.

He also said he expects to see the completion of the municipal parking deck being built just south of Dickson Street on the southeast corner of the Walton Arts Center campus.

The city added 3.5 miles of new paved trails in 2014, including all of Fayetteville’s planned sections of the Razorback Greenway, a 36-mile route planned from south Fayetteville to Bella Vista. Jordan said another three miles of trails will be built in 2015 for segments of the Town Branch and Clabber Creek trails.

“Strategic investment in infrastructure produces a foundation for long- term smart growth, and our people deserve to see where their dollars are going and what infrastructure is being built,” said Jordan.

He said despite a nearly split vote on the repealed Civil Rights Administration ordinance, the city’s unique and compassionate spirit remains intact.

“We are not a divided city like some argue,” said Jordan. “What is revealed by the recent debates and conversations about the city’s civil rights ordinance is that we are still Fayetteville – a vibrant community that welcomes open dialogue about important issues.”

He said the concerns raised about the specifics of the repealed civil rights ordinance should serve as a roadmap for a new proposal.

“Let us address those issues, listen to the people, make the necessary technical changes, and craft a better ordinance for all in the future,” Jordan said. “As the Reverend Martin Luther King, Jr. said, ‘The time is always right to do what is right.”

Jordan listed several other projects he’s excited about in 2015, including construction of the first phase of the new regional park in south Fayetteville; a disc golf course at Walker Park; a new city website; and upgraded presentation systems in City Hall rooms 111, 219, and 326.

“Together, we have made wise investments and bold moves,” he said. “Together we will continue to lead our city to become all that we want for our neighbors and our community. Together, and only together, we can build on our successes of last year and have an even brighter future for ourselves and our children.”