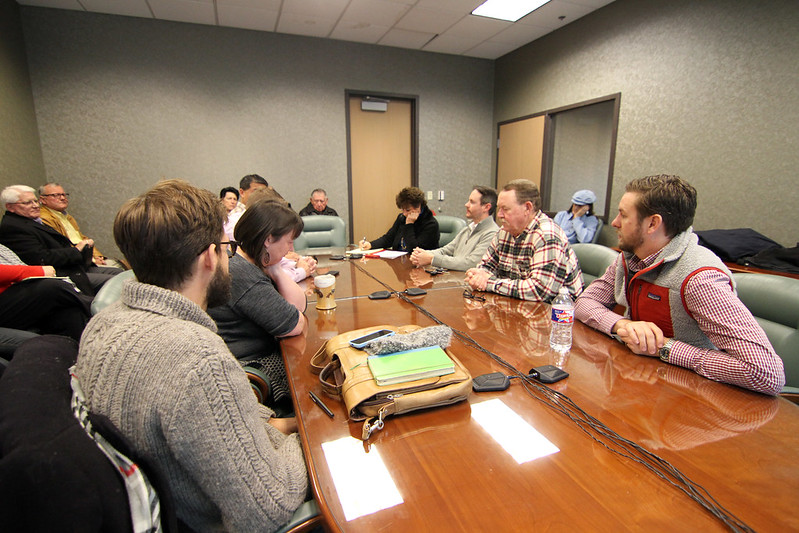 Matt Behrend (right) has served on the Fayetteville Advertising and Promotion Commission since January 2013.

Behrend, general manager of the Fayetteville Holiday Inn Express, has served on the commission since January 2013, when he replaced outgoing Commissioner Hannah Mills who resigned in December 2012.

Commissioners chose Behrend over one other candidate, Jim Huson, who owns Doe’s Eat Place restaurant on Dickson Street in Fayetteville and another location in Bentonville. Huson also owns the Old Post Office building in the center of the downtown square which he rents to Country Outfitter and Bliss Cupcake Cafe. Specifically, he said he’d like to help bring more events to Dickson Street that attract tourists to the city. Huson said locally-focused festivals like Springfest don’t have the same type of economic impact as larger events like Bikes, Blues & BBQ.

“We do a lot of stuff for the locals, but not enough bringing people in who want to spend bigger money,” said Huson.

Behrend agreed that tourism is important, but said commissioners must look beyond events that provide a pure monetary return on investment, and should also consider funding projects that contribute to the sense of community in Fayetteville.

“I like to stay as rounded as I can and think of things from all perspectives, even if it’s something that I wouldn’t attend,” said Behrend. “But you have to have the things that keep your community strong.”

Parades, festivals, and the Block Street Block Party, Behrend said, are what make Fayetteville so unique.

Commission chair Ching Mong and Commissioner Bobby Ferrell said they’d like to see Huson serve as a member one day, but neither was ready to see Behrend go.

Behrend’s selection will ensure the commission remains balanced by representatives from both the hotel/motel and restaurant industries.

The other commission seats include two City Council members (Adella Gray and Matthew Petty) and one citizen-at-large (Ferrell).

Behrend said he was excited to extend his stay after serving for only two years.

“I don’t feel like my work is done here,” he said.