A rendering shows the view of a planned Walmart Neighborhood Market looking northeast from the corner of Hill Avenue and Martin Luther King Jr. Boulevard in south Fayetteville.

Walmart cleared another hurdle in its plan to build a Neighborhood Market in south Fayetteville.

Although no residents objected to the development on Monday, the project was the subject of months of debate last year before aldermen approved a rezoning request that cleared the way for specific plans to be developed. The request was originally denied by the Planning Commission before being appealed to the City Council.

Opponents of the rezoning said while a grocery store is needed in that area, the neighborhood would be better off if the property were developed using one of the city’s form-based zoning districts which encourage pedestrian safety by requiring that buildings be constructed along the streetside sidewalks with driveways and parking lots tucked away in the rear. Another rendering shows a different view of the planned Neighborhood Market looking northwest from the corner of Government Avenue and Martin Luther King Jr. Boulevard.

Walmart officials said the site’s sloped topography would have made the project too expensive if a form-based design was used.

Customers will be able to access the new store from all three surrounding roads – Government Avenue, Martin Luther King Jr. Boulevard, and Hill Avenue. Government Avenue will include two entrances – one for customers and another for delivery vehicles. Customers exiting the parking lot onto King Boulevard will be restricted to right turns only.

A traffic study by Peters & Associates Engineers, Inc. determined the new store will generate an average of 3,649 new vehicle trips each day. The anticipated increase in traffic means Walmart must pay for several improvements to the surrounding streets including:

Martin Luther King Jr. Boulevard – A new 5-foot sidewalk will be built on the north side of the road. Street trees will be planted in the greenspace between the curb and sidewalk. 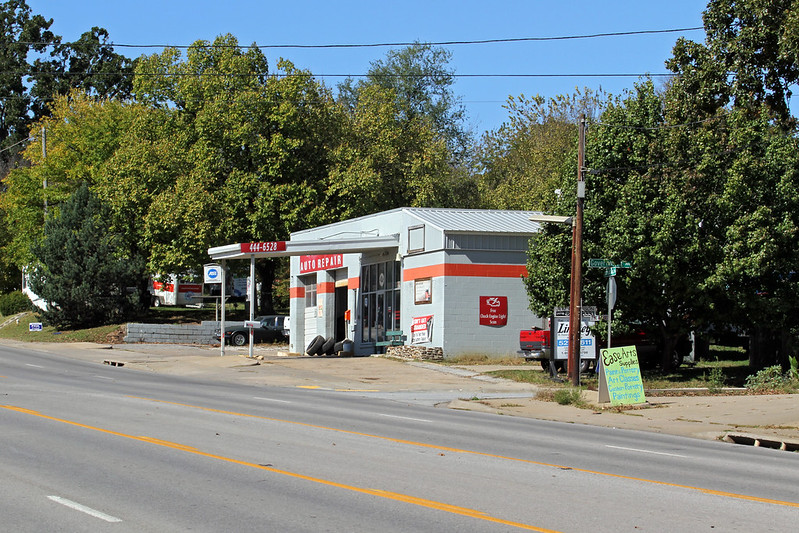 The planned grocery store will be built on the north side of King Boulevard between Hill and Government avenues where Robert’s Auto Repair and several other buildings are located.

Hill Avenue – A southbound left turn lane will be added which will require upgrades to the existing traffic signal. A 5-foot sidewalk will be built on the east and west sides of the street with connections extending over the Arkansas-Missouri Railroad crossing just north of the parking lot entrance.

Prairie Street – The existing Frisco Trail crossing will be converted to a raised crossing and “sharrow” symbols will be added to the roadway to help slow traffic to the east of the new store. A small sidewalk connection to the store will be added at the intersection of Prairie Street and Government Avenue.

The site, which stands one block from a recently completed 16-pump Kum & Go fueling station and convenience store, will not include a gas station as previously proposed.

While Monday’s decision was unanimous, several planning commissioners said they were still disappointed that Walmart chose not to use form-based design.

“I feel like this has turned what could be an interesting urban experience into a typical parking lot addressing the street,” said Commissioner William Chesser. “But I’m not sure there’s anything we can do at this point with this body…so I’m probably going to give my grudging support.”

“The discretion is basically during the rezoning,” Williams said. “Once it’s zoned, as long as they’re meeting the standards of the development ordinance, which staff tells you they have, then it must be approved at this stage of the game.”

The new store will be the city’s third Neighborhood Market. Other locations include the Kantz Center near Crossover Road and Mission Boulevard, and the Forest Hills development near Wedington Drive and Salem Road.