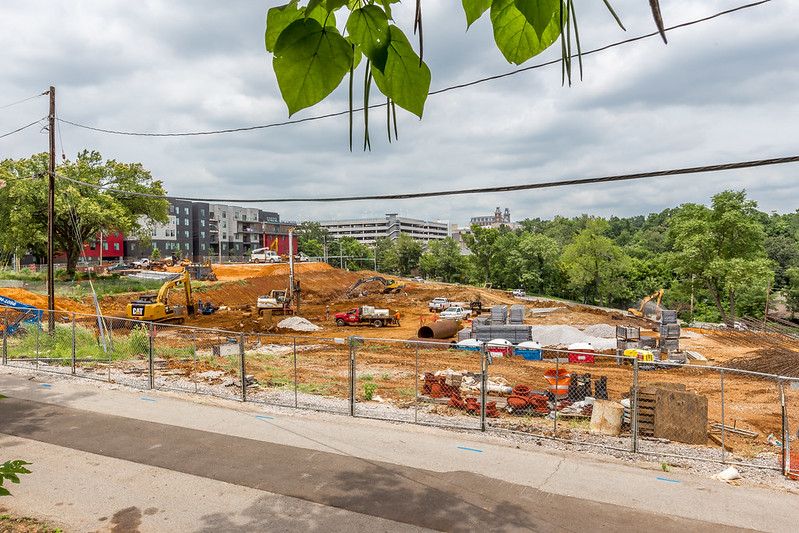 Construction of the @MOSPHERE apartment complex (formerly known as Harvey’s Hill) continues between Center and Treadwell streets, across from The Cardinal in Fayetteville.

Apartment occupancy is at another all-time high in Northwest Arkansas.

Despite the addition of over 3,000 student bedrooms in Fayetteville alone since 2012, occupancy rates continue to rise, according to findings of the most recent survey (PDF) conducted by commercial real estate brokerage firm CBRE Northwest Arkansas.

Average occupancy hit 98.5 percent in the four major cities, the highest rate recorded since the inception of the survey in 2010.

With so few units available, developers are busier than ever.

Four more student apartment complexes are under construction near the University of Arkansas campus, which will add nearly 2,100 more bedrooms in Fayetteville. And seven other new multi-family projects will add about 1,800 units to the region in the next 18 months.

“In the past it was our contention the boom in student housing construction around the University of Arkansas hindered market rate construction,” said Brian Donahue, an apartment specialist with CBRE. “As you can see…this appears to no longer be the case.”

Added enrollment at the University of Arkansas has made it increasingly difficult to find an apartment in areas surrounding the campus. Average occupancy is at 98 percent in Fayetteville, an increase of 2.5 percent from a year ago.

The Cardinal was the only student housing complex to open in 2014, but four more projects are expected to soon be completed in Fayetteville. Beechwood Village and the Gather on Dickson will add 337 units and 903 beds by the end of the year, while Sterling Frisco Phase II and @MOSPHERE (formerly known as Harvey’s Hill) will put another 476 units and 1,187 bedrooms in town by the end of 2016.

Four complexes are planned in Benton County: Thrive (62 units); The Trails at Bentonville (487 units); Woodland at Creekside (50 units); Promenade at Rogers (200 units); and The Pointe at Bentonville Phase I (170 units).

Donahue said a solid local economy and a major population increase continue to provide support for the strength of the apartment market.

Northwest Arkansas added 10,000 jobs in 2014, a job growth increase that ranked the region 26th among the nation’s 381 largest metro areas outpacing benchmark cities such as Austin, Texas, Raleigh, N.C. and Madison, Wis., according to CBRE. And an estimated 8.3 percent growth in population since 2010 led to the region’s surpassing of the 500,000 mark.

“As Northwest Arkansas continues to grow, we expect apartment fundamentals to remain strong in the coming year, despite the predicted increase in market rate apartment construction,” said Donahue.

Source: Northwest Arkansas Apartment Market Survey (PDF) for mid-year 2014. CBRE surveyed just over 22,000 of the area’s approximate 32,000 units. The survey does not include complexes with less than 50 units.