Steve Clark (left), president of the Fayetteville Chamber of Commerce, leads City Council members Adella Gray, Mark Kinion, and a half dozen others on a tour of the chamber building Monday afternoon.

A decision on whether the city should look into purchasing the Fayetteville Chamber of Commerce building could come tonight.

The chamber plans to move its offices into the Bradberry Building on the south side of the downtown square by Jan. 1.

Council members Adella Gray and Mark Kinion said they brought the issue forward because they felt the city should at least explore the idea before someone else buys the building, which is sandwiched between City Hall and the city’s Development Services building.

“I feel that we need to study that property and study our needs and long-range plans before we allow the building to be sold out from under us,” Gray said at the July 21 City Council meeting. “It may be a long time before we ever have a chance to buy this property again.” 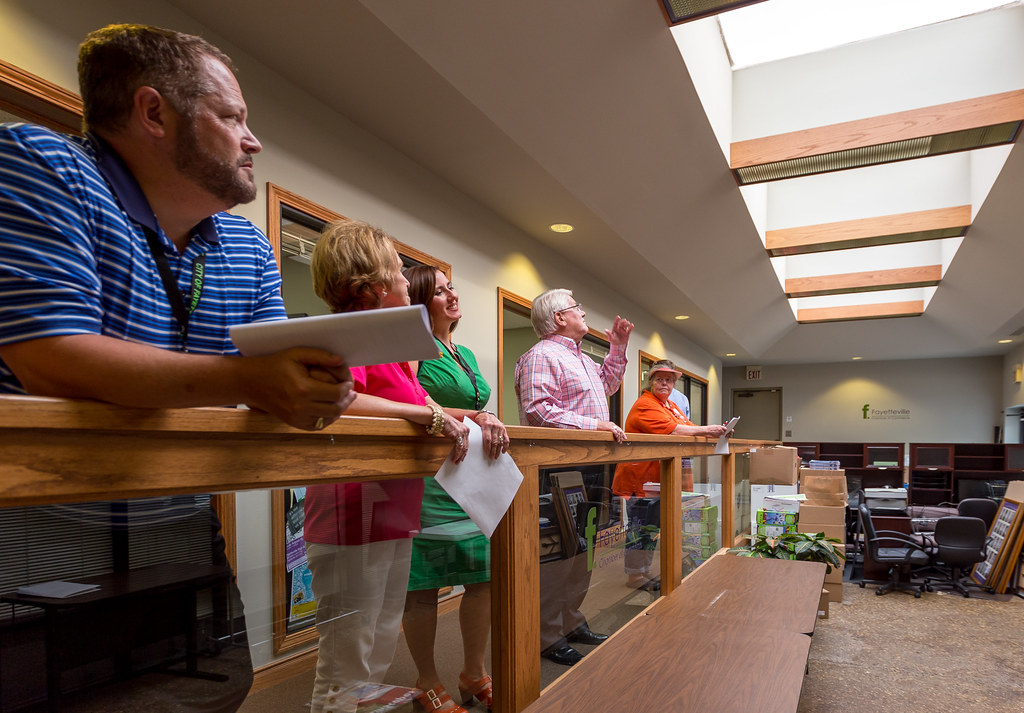 Aldermen and city staff toured the Fayetteville Chamber of Commerce Monday ahead of a discussion on whether the city should look into purchasing the building.

The building is surrounded on all sides by city-owned property, including the Police Department and The District Court building on Church Avenue to the south.

Mayor Jordan said he began exploring the idea weeks ago after Steve Clark, chamber president, offered to sell the building to the city for $900,000 before the chamber’s move was announced.

The 6,000-square-foot building is currently listed at $998,000. It comes with 80 feet of frontage on Mountain Street, and includes nine offices, two conference rooms, a work room, two bathrooms, a small kitchen, and 14 private parking spaces.

Jordan asked Paul Becker, the city’s finance director who also oversees facilities management, to look into the feasibility of purchasing the building.

After evaluating the city’s needs, Becker said the only divisions in need of additional space are the Police and Fire departments, neither of which are a good fit for the chamber building.

Police Chief Greg Tabor said the department does indeed have plans to one day build or purchase a larger building, but said it would need to be more centrally located with quick access to Interstate 49 to best serve the city. The Fayetteville Chamber of Commerce building is located at 123 W. Mountain St., between Fayetteville City Hall and the city’s Development Services building.

Becker also pointed to a 2011 staff study of the city’s space needs through 2025 which determined there was no need to purchase the East Square Plaza building on the east side of the square. The building was owned by Ted Belden, who offered to sell it to the city before it was eventually purchased by the University of Arkansas.

Becker estimated the building would need up to $300,000 in renovations, depending on how the city used the space. Staff said indoor access to the Development Services building could be achieved to the west, but an alleyway to the east would make a direct connection to City Hall impossible without razing, removing, and rebuilding the structure to include at least two stories with a skywalk.

Becker said with no need for additional downtown offices through at least 2025, he couldn’t recommend the city spend the $1.2 million needed to purchase and remodel the building.

Kinion said he sees the building as a possible investment for the future, not something that would satisfy any urgent need. He said the city could rent the space to generate some revenue until more offices are needed.

Alderman Matthew Petty said he understands the logic in essentially banking the land away for future needs, but only if there’s a way to cover the carrying costs in the meantime.

Petty said he’s not opposed to the city acting as a landlord of the property until it’s needed, but added that there are several acres of city-owned property across the street that are currently being used as a parking lot which could one day be redeveloped for a number of uses.

“I don’t see a risk of there not being land to exist on,” said Petty.

Alderwoman Sarah Marsh said she’d prefer to see the building become a shop or restaurant instead of keeping the building off the property tax roll. As a private, not-for-profit organization, the chamber is exempt from paying real estate taxes.

Marsh said she’s not against the idea of exploring the issue further, but said it would take a lot to convince her to support the purchase of the building.

The group will continue the discussion at their 5:30 p.m. meeting today (Aug. 4) inside City Hall at 123 W. Mountain St.