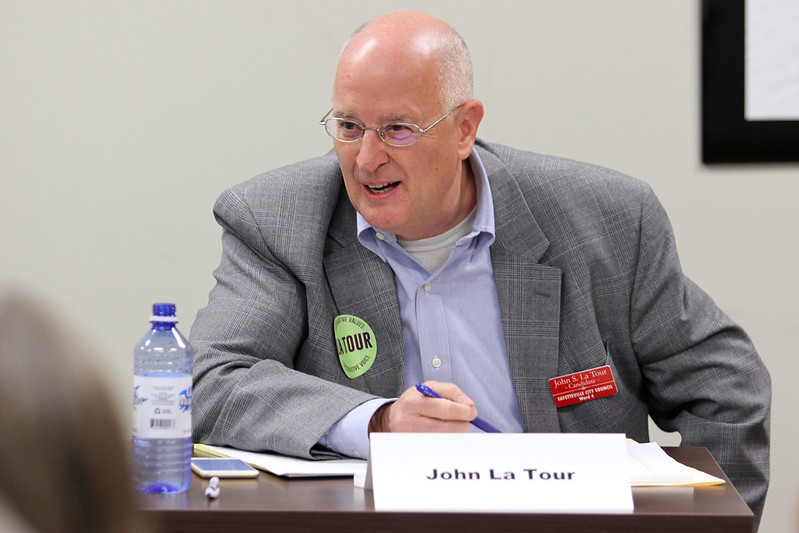 John La Tour speaks during a candidate forum in the run up to his eventual election to the Fayetteville City Council in November 2014.

Fayetteville Alderman John La Tour says he has no plans to step down despite an online petition calling for his immediate resignation.

The petition, which had gathered over 2,500 signatures by Monday afternoon, was launched following an incident that occurred Friday morning while La Tour was dining at the Arsaga’s at the Depot restaurant on Dickson Street.

La Tour, who represents Ward 4, said he was meeting with some acquaintances at the restaurant when he began having trouble hearing his colleagues over the music. He said he asked a server to lower the volume, but was told that the music would not be turned down any further.

La Tour said he became frustrated and decided to “shimmy over to the counter” where he told an employee that he might as well start dancing.

“It was a facetious gesture to make a point,” said La Tour. “I was just trying to make lemonade out of lemons.”

La Tour said he wasn’t sure of the employee’s gender, so he asked her to confirm that she was a woman.

“Being a heterosexual, I don’t dance with men,” said La Tour.

After some back and forth, La Tour said he told the woman, “I am a man and I can prove it.”

A few minutes later a manager asked him to leave the restaurant.

Initial accounts claimed La Tour offered to expose himself to prove his own gender, but La Tour insists the thought never crossed his mind.

“There are ways to prove gender, such as a birth certificate,” he said. “But I never had anything specific in mind.”

Cary Arsaga, owner of the restaurant, said he was not present during the incident, but said it is his understanding that La Tour’s account is mostly accurate. Arsaga did not identify the employee, but said she is “mortified” by the attention the incident has received.

La Tour later took to social media where he urged residents to boycott the restaurant.

“Everyone that lives in Fayetteville, AR should never eat or treat themselves at any of Cary Arsaga’s establishments,” La Tour wrote on his political Facebook page. “I will never go to any of these again.”

That post was later removed and replaced with a statement praising Arsaga’s.

“I have often stated that the best economic development plan we can have as a City is to get out of the way and let entrepreneurs chase their dreams,” the new post stated. “I stand by this statement. Cary Arsaga is one of those entrepreneurs. I am glad to cheer him on, and I wish him well.”

Arsaga said he met with La Tour Monday morning who apologized for the incident and the original Facebook post. Arsaga said he told La Tour his actions were inappropriate, but that he was willing to move on.

“I think forgiveness is important in a small community, and that’s what I told John,” Arsaga said.

In hindsight, La Tour said he wishes he hadn’t confronted the woman.

“It was a weak attempt at humor,” he said. “I did not mean to insult her, and I apologized to her before I left.”

It’s the second time La Tour has been reprimanded for publicly questioning someone’s gender this year.

La Tour questioned the need for the contract and asked city staff the names of some representatives of the center so he could discuss the project with them. After hearing the name of one of the individuals, La Tour asked, “Is that a man or a woman?”

A staffer responded by saying, “That is a ma…a female,” nearly misstating the woman’s gender by accident.

La Tour laughed and said, “I guess that’s a hard question these days.”

“It shouldn’t matter to the city if it’s a man or a woman who is working for us,” said Williams.

La Tour agreed, but said, “it matters to me if I’m looking for them, and if I want to talk to them and interview them.”

While La Tour’s actions may not have been as hostile as initial reports suggested, organizers of the petition say their demand for his resignation stands.

“We still believe Mr. La Tour is unfit to represent the people of Fayetteville,” said Kyle Smith, a Ward 4 resident who is a spokesman for For Fayetteville, a group formed to support the city’s recently adopted Uniform Civil Rights Protection ordinance.

La Tour, who campaigned against the ordinance, has remained a vocal opponent of the new law, which prohibits business owners and landlords from firing or evicting someone because of their sexual orientation or gender identity.

Smith said La Tour’s actions, combined with his sustained opposition to a voter-approved civil rights measure indicate a pattern of behavior that is out of step with the values of Fayetteville residents.

La Tour said Monday he was aware of the petition, but wrote it off as an attempt by supporters of the civil rights ordinance to discredit him.

“They’ve always had it in for me, like dogs waiting to leap,” said La Tour.

La Tour said when he saw the petition, he “dismissed it in about a nanosecond,” adding that he would never resign from the council.

“They have every right to attempt a recall election, but I’ll fight it tooth and nail,” he said.