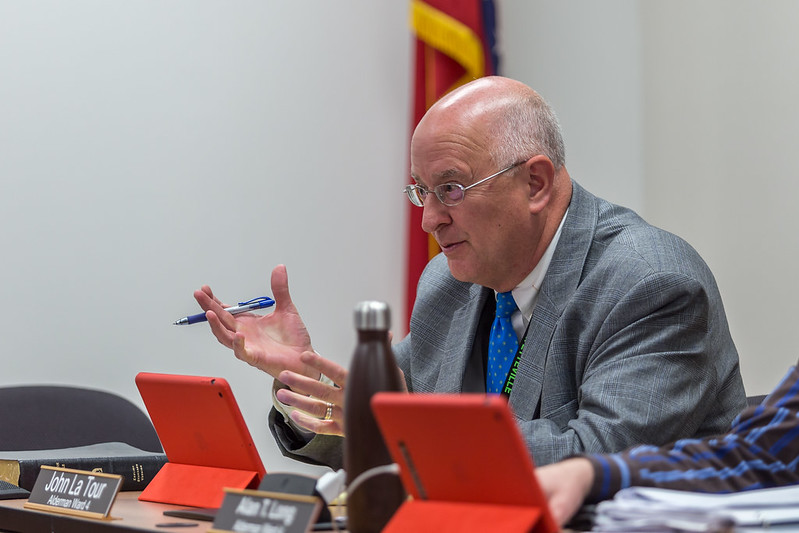 Ward 4 Alderman John La Tour could find his name back on the ballot less than two years into his first term on the Fayetteville City Council.

For Fayetteville, a group originally formed to support the city’s new civil rights ordinance, has organized a petition drive to force a recall election of La Tour, who would normally not face a re-election challenge until 2018.

It’s the same group that called for La Tour’s immediate resignation last week after an incident at the Arsaga’s at the Depot restaurant on Dickson Street.

During his regular visit to Arsaga’s, La Tour asked a barista what her gender was and told the woman, “I am a man and I can prove it.” A few minutes later a manager asked him to leave the restaurant.

La Tour then took to Facebook where he urged residents to boycott the restaurant. He later removed the post and met with owner Cary Arsaga to apologize.

It was the second time La Tour had been reprimanded for publicly questioning someone’s gender this year. City Attorney Kit Williams last month scolded La Tour for asking whether a city vendor was a man or woman.

Kyle Smith, a Ward 4 resident and spokesman for For Fayetteville, said La Tour’s actions, combined with his sustained opposition to the voter-approved civil rights measure indicate a pattern of behavior that is out of step with the values of Fayetteville residents. During a regular Ward 4 meeting on Monday, nearly 50 people filled a room inside City Hall to speak directly to La Tour, many of whom said they had been blocked from communicating with La Tour on his political Facebook page.

“Many of us have tried to reach Mr. La Tour via social media recently to express our concerns and many of us have been met with resistance, and even out-right blocking,” said Mike Emery, a Ward 4 resident who once ran for City Council. “It is your option to do that, but to simply ignore the voices that you were elected to represent is a serious breach of trust between you and your constituents.”

Emery called the recent incident at Arsaga’s a national embarrassment and said it sent a message to the world about Fayetteville that does not represent what the city and its citizens are about.

“I certainly respect your right to come and voice your opinion,” La Tour responded. “I have apologized more than once for what occurred more than a week ago. I have nothing more to say.”

Speaking to the crowd, Smith said La Tour’s voting record is another mark against his reputation as an alderman.

“In his 15 months in office, alderman La Tour has consistently voted to block federal grant assistance to city programs like the Fayetteville Farmers’ Market and housing assistance for the homeless,” Smith said, adding that La Tour was the only council member to vote against the city’s sidewalk improvement plan, a millage increase for new fire and police positions, and several proposals benefitting the public library, city trail system, and efforts to protect natural resources.

“It doesn’t matter what the issue is, you’ve been a consistent obstacle to growth and progress in Fayetteville,” Smith told La Tour.

One after another, residents stood to echo Emery and Smith’s sentiments, all of whom were met with a similar response from La Tour.

Bob Stafford, a Ward 2 resident, said La Tour’s actions at the restaurant were an attack on transgender people and said he owed the entire transgender community an apology.

“These are people that suffer an inordinate amount of discrimination…much higher than the rest of us,” Stafford said. “Are you going to apologize to them?”

“I have nothing more to say,” said La Tour. “This is old news. If you want to keep it alive, keep it alive. But I won’t participate.”

Not everyone was there to lecture the alderman on Monday.

Michael Collins, a 2014 City Council candidate who dropped out of the race to support La Tour, said he appreciated La Tour “standing boldly” as the lone dissenting vote on the council.

Paul Phaneuf, who also ran for City Council in 2014 as a vocal opponent to the civil rights ordinance, agreed with Collins and dismissed the recent controversy as “weaponized hypersensitivity.”

Despite the large turnout on Monday, La Tour said he is “not a quitter” and has no plans to resign.

Smith told the crowd that removing La Tour from office would be a difficult task.

Arkansas law requires 25 percent of a ward’s registered voters to sign a petition before a recall election can be held. That means For Fayetteville would need to gather about 3,300 valid signatures of Ward 4 residents over the next four months to add La Tour’s recall vote to the November general election.