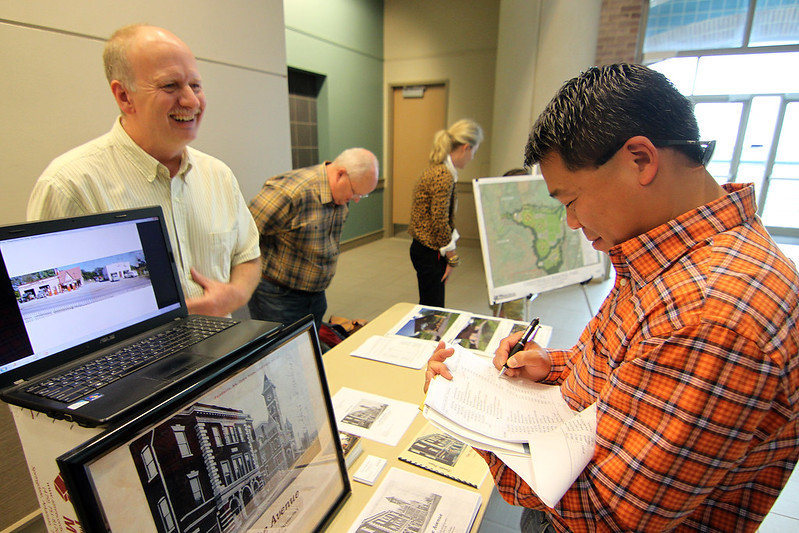 Tony Wappel (left) talks with A&P commissioner Ching Mong in 2014 about his new book, On the Avenue: An Illustrated History of Fayetteville’s US Highway 71B.

The Fayetteville Advertising and Promotion Commission on Monday made a fairly significant change to its grant funding process.

Groups seeking funds no longer need to show up in person to present their ideas to commissioners before a decision is made whether to fund their projects.

Each spring and fall, the commission awards non-budgeted funds to groups needing financial help with promoting or starting a local event. The application process includes formal presentations held inside the Town Center where commissioners can visit with each group. Presentation materials range from stapled black-and-white printouts, to colorful poster boards set up on easels, to slideshows on iPads and computer monitors.

Commissioners have toyed with the idea of removing presentations several times over the past few years, but no action has been taken.

“I don’t want to do anything that makes the process look less transparent, but I don’t know if (presentations) help up make a better decision,” Rawn said.

“I think that in some cases it’s overly burdensome on the groups that are applying, particularly for smaller non-profits,” she said, adding that groups with more sophisticated materials may have an advantage over organizations whose volunteers don’t have access to trade show booths or more modern presentation tools.

Matthew Petty, chair of the commission, agreed with Rawn.

“This is a suggestion that I think we should take,” Petty said. “I have heard from a handful of applicants in the last three years who look forward to and appreciate it and 10 times more that think it’s largely ceremonial and is unneeded.”

“I think we try it and see,” said Behrend. “If we find that it’s not as productive, or if we have more questions, we can always revisit it later.”

Commissioner Ching Mong said he wasn’t against the idea, but wanted to make sure there was still an opportunity for some back-and-forth with the applicants.

“Where I’ve found value is not so much in the presentations, but in the fact that everybody was available for questions on that particular day,” said Mong.

Petty suggested commissioners submit their questions to Rawn who could then relay the inquiries to the applicants. That way, he said, the information could be on the record to help promote transparency in the process.

Groups have until Oct. 1 to apply for grant funding from the Fayetteville Advertising and Promotion Commission.

Applications are available at experiencefayetteville.com/commission, or here (PDF).

Recipients will be named by Nov. 21.