Fayetteville being named 3rd best place to live, an April Fool’s Day prank, and lots of news on restaurant openings and closings highlight the most popular stories on the Flyer in 2016.

As the year comes to a close, we usually spend some time looking at analytics to see what Fayetteville found interesting for the previous calendar year. We also like seeing how our site and audience has grown.

Here are our top 25 most popular stories of the year. Our most popular story of the year came in March, when U.S. News & World Report named Fayetteville the 3rd best place to live in the United States.

Our second most read post of the year came on April Fool’s Day, when someone placed a sign advertising a future “Six Flags over Jesus” theme park in west Fayetteville.

The sign appeared to be in protest of Cross Church’s plans to build a new Fayetteville campus on the 13-acre site at the southeast corner of Wedington Drive and Interstate 49. 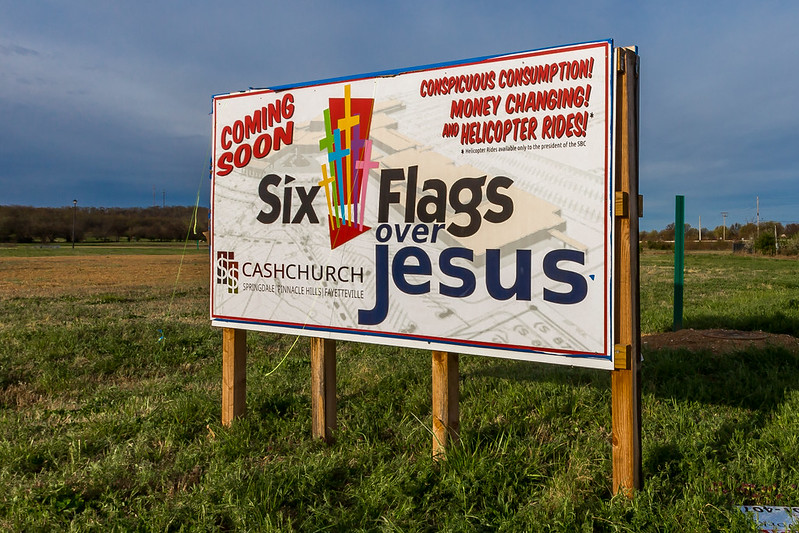 3. Where to watch fireworks in Northwest Arkansas in 2016 Our annual guide on where to watch fireworks around the Fourth of July is always a top story. This year’s post, just as it did last year, landed in the top 3.

Read it: Where to watch fireworks in Northwest Arkansas in 2016 Longtime local burger joint Mr. Burger closed down in February, resulting in our fourth most popular post of the year.

We actually got wind of the news before the closure, which resulted in some long lines those last few days of folks trying to get their final taste of the restaurant’s signature burgers and fries. The restaurant ended up closing earlier than expected because they simply ran out of food. Long time local restaurant Common Grounds called it quits after 18 years in business on Dickson Street back in February as well.

Owner Kari Larson told us at the time she was closing down to focus on her landscaping business.

Read it: Common Grounds to close on Dickson Street Our regular roundups of restaurant openings and closings are always a popular feature on the site. This one from January included news on the opening of Mockingbird Kitchen, Kraken Killer Seafood, and several other tidbits. It was the sixth most popular post on the Flyer in 2016.

7. Fayetteville woman may be onto something big with Little Free Pantries Fayetteville resident Jessica McClard made national news when she had the idea to take the concept behind the Little Free Library and apply it to helping to address food insecurity in Fayetteville.

We wrote about her Little Free Pantry concept back in July.

Read it: Fayetteville woman may be onto something big with Little Free Pantries

Another restaurant roundup comes in at number eight on our most popular stories list. This one included news on Prelude Breakfast Bar, Mr. Taco Loco, The Backyard at Greenhouse Grille, Sabor Guacamole, and several other juicy restaurant tidbits. Not long after Common Grounds closed, we began hearing rumors that a Taco Bell Cantina – the restaurant chain’s urban concept that serves alcohol and an more “upscale” menu – would be replacing the restaurant.

We finally wrote about the rumors – which turned out to be true – back in April.

10. 9 fun food, drink and music festivals coming up in Fayetteville Back in cold January, we wrote about some food and drink festivals coming up in the (mostly) warmer months ahead.

Read it: 9 fun food, drink and music festivals coming up in Fayetteville

19. Take a look inside the new Fayetteville Whole Foods Market

23. Locals form ‘Not My City’ to help keep Fayetteville peaceful

24. Weezer coming to the AMP on July 17 with Panic! At the Disco