While winter is still playing cat and mouse with us, Dave Van Horn’s Arkansas Razorback baseball team opened baseball practice this week for what should by all accounts be an exciting season.

Fans who want to get up close to the Diamond Hogs will have their chance Saturday when Arkansas hold its 23rd-annual Meet the Razorbacks event from 3 to 5 p.m. at the Northwest Arkansas Mall.

Fans are encouraged to get autographs and take pictures with members of the team. Autographs are limited to one item per person, according to a press release from Arkansas Media Relations. The Razorback Diamond Dolls, RBI Girls, and Ribby the Mascot will also be available for pictures and autographs, according to the release.

The Hogs go into the season with a top-six ranking in the major polls, including being ranked No. 3 by Collegiate Baseball magazine.

Fayetteville native Grant Koch goes into the season as the most decorated Razorbacks.The junior catcher was named a third-team, preseason All-American after starting 63 games of the Hogs last season and being named first-team All-SEC. He hit 13 home runs, had 42 RBIs, and batted .264 for the season.

The Hogs’ season-opening series is just two weeks from today when they host Bucknell for a three-game series Feb. 16-18 at Baum Stadium.

While many of Arkansas’ games can be streamed through the internet, at least 11 of their regular-season games will be televised this year, but the first won’t be until March 13 when the Hogs host Texas at Baum Stadium.

The first Swatters Club meeting will be held at 11:30 a.m., Feb. 8 at the Hilton Garden Inn in Fayetteville. Subsequent meetings will be held on the first Monday of the month on March 5, April 2, and May 7. Van Horn will speak to the fans at each meeting.

Hammer Down on Recruiting 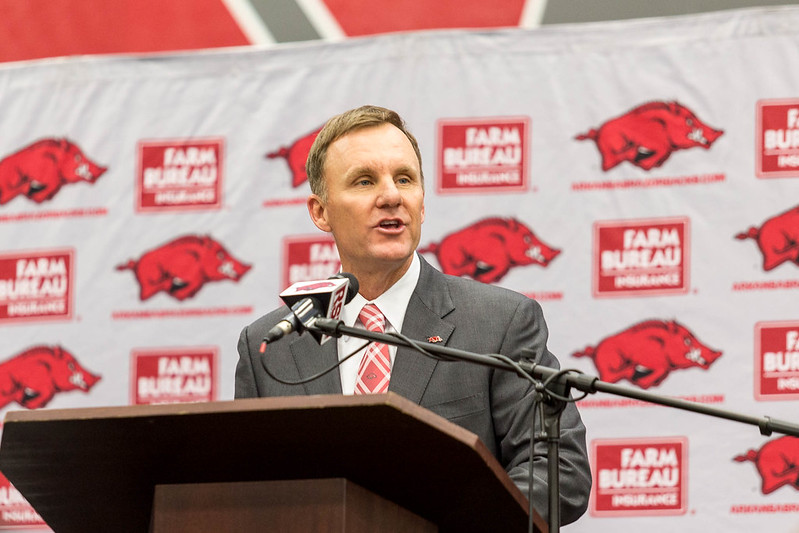 We are just five days away from college football’s late national signing period on Wednesday, and Chad Morris and his Arkansas Razorback staff still have the hammer down trying to put together the best possible recruiting class theu can for their first year on the job.

Well, I say year, but actually Morris will have been on the job at Arkansas less than two months on Wednesday.

Arkansas’ recruiting class isn’t going to bowl anyone over in terms of rankings. With the players Arkansas signed during December’s early signing period along with the ones that will sign on or around Wednesday, the class will only be around 16 strong.

Programs are allowed to sign as many as 25 new recruits a year, but are only allowed to carry 85 total athletes on scholarship. Say what you will about the job he did at Arkansas, but former Hog coach Bret Bielema and his staff did a solid job at retaining players.

When a program has good retention, some of its recruiting classes are going to be smaller. While that can be a sign of a healthy program, it doesn’t help with recruiting ratings.

Bielema also banked on a few on number blue-shirt scholarships that count against this signing class. A blue-shirt scholarship is, when the athlete’s parents pay his way to school for a semester and then the player is put on scholarship in January of the following season. Morris is honoring those commitments made by Bielema, which includes a player like offensive lineman Ty Clary of Fayetteville, who started several games last year as a freshman.

In the grand scheme, Bielema’s moves don’t hurt Morris because players like Clary or linebacker Hayden Henry appear to have very good futures with the Razorbacks, but it does reduce the overall numbers Morris can sign his first year.

Morris and his staff are recruiting with the short end of the stick in terms of numbers, but that might not be a bad thing. With fewer scholarships to offer, Morris and his Hog recruiters have more time to commit to their key targets. That’s not a bad thing.

Morris has a talented group of recruiters on his staff, and it stands to reason with a full year to work, they will have a better shot at higher-quality recruits next season. In that regard, it mightl be better for the Hogs to use more of its total of 85 scholarships next season.

Time for Hogs to get their stuff together CBS bracketologist Jerry Palm delivered a gut punch of sorts to Razorbacks fans and perhaps the Hogs themselves Wednesday with his comments on the “Sports Talk with Bo Mattingly” radio show.

Palm, who updates his projected NCAA Basketball Brackets for CBS on a weekly basis based on the body of work up to that point in the season, did some mental mathematics with Arkansas’ schedule while on the air and stated the Razorbacks needed to win seven of their last nine regular season games to feel comfortable about a NCAA Tournament bid going into the SEC Tournament.

That opinion left many who heard it gasping after the Razorbacks’ poor performance Tuesday night in a 80-66 loss at Texas A&M. The loss dropped the Hogs to 15-7 overall and 4-5 in SEC play. Based on the way the Razorbacks have been playing, winning seven of their last nine games seems not only improbable but also impossible.

However, the key word in Palm’s statement was “comfortable.”

If the Hogs win seven of their last nine games, they will be 22-9 overall and 11-5 in league play and would probably be penciled in as a sixth or seventh seed going into the SEC Tournament with perhaps the possibility of moving up a seed by winning the tourney.

But, if the Razorbacks finish anything less than 5-4 during the back half of the SEC schedule, the Razorbacks would likely need to win the SEC Tournament to secure the league’s automatic bid.

I still see the potential in this Razorback squad closing out the season in fine fashion and having a good season, but the Hogs have got to get their stuff together.

Razorback head coach Mike Anderson said as much Thursday in his press conference.

Anderson needs 40 minutes of urgency from everyone of his Hogs for the rest of the season. Their sporadic play on defense, and their I-got-it, I-shoot-it mentality on offense has to be put on the shelf.

The Razorbacks need to force the issue on defense from tip off to the final buzzer, and they need play with assurance and confidence on offense.

To me, defense is he key. The Hogs are allowing league opponents to shoot 46.9 percent from the field and 39.1 percent from the three-point line. That’s bad. It’s bottom of the barrel or near it in both categories in the league, and it’s exactly why the Razorbacks are either barely winning or getting blown out of games.

The Razorbacks play at LSU at 2:30 p.m. Saturday on the SEC Network. The Tigers did a number on the Hogs on Jan. 10 at Walton Arena, kicking their behinds 75-54. It should have been an embarrassing loss to the Hogs.The Razorbacks should be dying to return the favor.

Since that game, LSU (12-9, 3-6 SEC) has struggled. Actually, that’s putting it mildly. The Tigers have lost 5-6 contests since then, including an 84-61 loss at Tennessee on Wednesday.

The Razorbacks need to make a point of turning their season around at LSU. They have every opportunity to make it happen.

The Razorbacks have grand opportunities to knock off No. 21 Kentucky on Feb. 20 and No. 22 Auburn on Feb. 27 at Walton Arena. I know the Hogs will be up for those games, and Walton Arena will be rocking.

However, Arkansas’ next five game against LSU, South Carolina, Vanderbilt, Ole Miss, and Texas A&M that are going to write the story of this season.

The Hogs have urgent business staring them in the face, and they had better handle it, or they are going to be like most of us fans in March, watching the NCAA Tournament on TV.