City Council members next week will consider a proposal to establish rules and boundaries where residents could drink alcohol at special events and festivals without having to stay inside a fenced-in beer garden.

The move comes on the heels of Act 812 of 2019, which was sponsored by Sen. Trent Garner (R-El Dorado). The new state law allows municipalities to create designated entertainment districts inside commercial areas that contain places like restaurants, bars, music venues, art galleries, and other entertainment or hospitality establishments. Those districts would be exempt from state laws that prohibit public alcohol consumption.

The new law is aimed at promoting hospitality and tourism in Arkansas cities.

Mountain Home was the first city in the state to create an official entertainment district that allows open containers. Within that district, people can drink in public between the hours of 4:30 p.m. and midnight every day of the week. 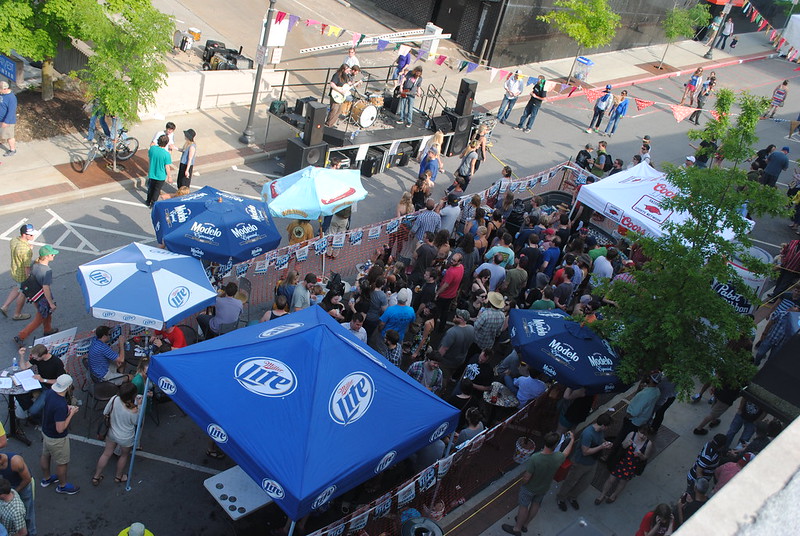 “It is important to note that this is not a free-for-all,” said Blake Pennington, the city’s assistant attorney.

Pennington said the proposed ordinance will allow outdoor consumption of alcohol only during special events that are authorized by the mayor on an individual basis.

The boundaries of the district have been shifted a bit from the city’s already established entertainment district that encompasses the Dickson Street and downtown areas.

Stoll presented the proposed boundaries at the council’s agenda-setting session on Tuesday (see map below). During that meeting, Pennington briefed the council members on the other proposed rules for the district.

He said the open container areas would be restricted to streets that are closed to traffic, like when Dickson Street is blocked off during Springfest or other special events and festivals.

“We don’t want to mix pedestrians with alcohol and cars,” Pennington said.

Other conditions include a rule that only allows alcoholic drinks inside a compostable or reusable cup. Those cups, he said, could be provided by either a bar or restaurant, or even by the city through a future program.

Under the proposed rules, people would only be allowed to have one drink at a time, and containers would be limited to 16 ounces or less. Drinks from one bar couldn’t be taken into another bar, and drinks wouldn’t be allowed in other private establishments without the consent of the owner.

Finally, alcoholic drinks could only be consumed if they were purchased from a vendor inside the entertainment district. In other words, people couldn’t bring their own drinks into the district.

Alcohol would be allowed at longstanding special events, including the Saturday Farmers’ Market, First Thursday and Lights of the Ozarks.

Fayetteville City Council members will formally take up the proposal during their next meeting on Tuesday, Aug. 20.