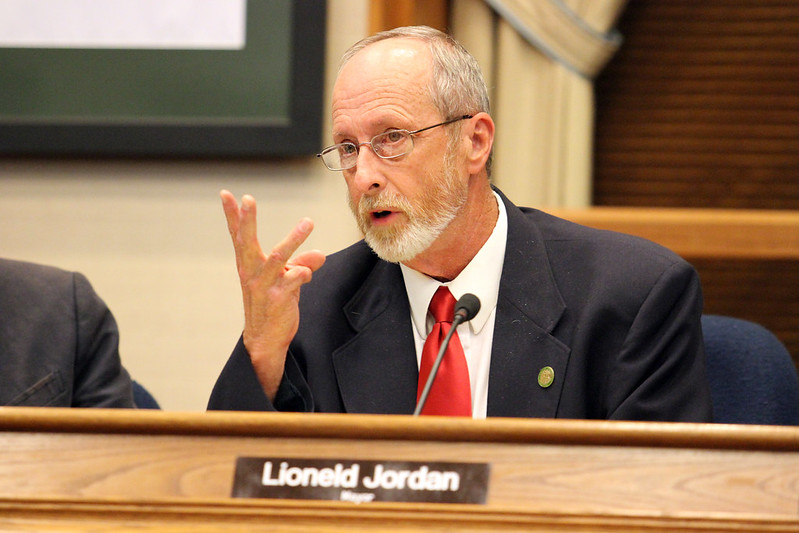 The Fayetteville City Council on Tuesday voted unanimously to pass a resolution reaffirming the city’s commitment to protecting transgender people.

The proposal was first announced last week by City Attorney Kit Williams, who said he felt compelled to do something after the Arkansas Legislature recently passed several bills that appear to have limited the rights of transgender people.

Williams said while the city can’t stop the state from adopting its own new laws, the measures are in direct contrast to what Fayetteville voters showed at the polls in 2015 when they passed the city’s Uniform Civil Rights Protection ordinance in a special election.

That law was immediately challenged and upheld in circuit court, but then was appealed by Arkansas Attorney General Leslie Rutledge and eventually defeated.

One recently passed state measure prohibits physicians from providing gender-affirming treatment for trans people under age 18 (HB 1570). It’s the first law of its kind in the United States. Gov. Asa Hutchinson vetoed the bill, but the state’s General Assembly voted to override the veto.

Another new bill bans transgender student athletes from joining female sports teams (SB 354). Gov. Hutchinson signed that bill in support. Arkansas was only the second state to pass such a measure. Mississippi adopted a similar bill in February.

A third new law allows doctors to deny nonemergency treatment to anyone if they have a moral or religious objection (SB 289).

“In an already challenging year for tourism, this will only continue to negatively impact our industry, the state’s second largest economy,” said Molly Rawn, CEO of Experience Fayetteville. “More importantly, these laws will further marginalize the transgender community.”

Walton called the measures harmful and said they send the wrong message to those willing to invest in or visit Arkansas.

During Tuesday’s meeting, most council members said they were in full support and asked to also be added as co-sponsors of the resolution on the city’s records.

Council Member Teresa Turk was first to speak and said diversity and inclusion is foremost in Fayetteville in order to maintain the culture of the city. Council Member Kinion agreed, and said the city has a heritage of welcoming everyone, and that should be enhanced and preserved.

Council Member D’Andre Jones said Fayetteville has been voted as one of the best places to live in the country and a large part of that is the city’s inclusive and equitable nature.

Council Member Holly Hertzberg said she supports the resolution, but can’t denounce all of the new state laws.

“I am not at all questioning the rights to such treatment for individuals over the age of 18,” Hertzberg said. “I’m simply stating that there’s a difference between a 13-year-old requesting gender transition procedures and a 19-year-old making the decision for themself.”

She also said she supports a healthcare professional’s right to refuse treatment based on religious or moral objection.

“As long as treatment is available from alternative providers, then the conscientious objections of a single practitioner should not be accorded less merit than that of a patient,” said Hertzberg.

Council Member Sloan Scroggin, who is a math instructor at the university, said he has taught Democrats, Republicans, people of different races, sexual orientations and trans individuals. He said anyone who would refuse to teach a person for any of those reasons should quit teaching, and he believes the same thing about people in the medical field.

Jared Wolf, president of the locally-based nonprofit Transgender Equality Network, said the new state laws have created a broad legislative landscape of fear and rejection, and he’s heard from many local transgender people who wonder if they should move for their safety.

Despite the Legislature’s actions, Wolf said Fayetteville’s continued efforts of inclusion do provide some relief for the transgender community.

“The recent legislation has made it abundantly clear that Arkansas is not of one mind regarding the equal status of transgender people,” said Wolf. “The ongoing statements of affirmation that the city of Fayetteville does continue to actively work to include transgender people and create a place of welcome does give many of us hope. I am forever grateful that Fayetteville continues to stand by its minorities, especially the transgender community.”

Mayor Lioneld Jordan said the recently passed laws prohibit cities from passing ordinances that protect the health and safety of its own people, and are clear discrimination against a class of people.

“They have attacked our ability to locally control our city,” said Jordan. “I think that’s wrong.”

He told the council the state’s decisions are the wrong laws in the wrong place, and they send the wrong message. But the resolution before the council, he said, is the right message in the right place at the right time.

“You don’t always have to stand tall, but you do need to stand up and let your voice be heard,” said Jordan. “And that’s what we’re doing tonight. We’re standing up for what is right.”