The big news over the weekend — outside of Razorback baseball’s splendid sweep of the LSU Tigers — was word that Arkansas football coach Sam Pittman and Arkansas have agreed to a contract extension for the third-year coach.

At this writing, the full details of the agreement have yet to be released to the media, but Pittman said Saturday that both sides have agreed to a contract that locks him in as the head Hog.

Locked in place, now Pittman can go out and recruit without the hinderance of scuttlebutt about him ever leaving Fayetteville until he retires.

That’s important with the type of personal relationships Pittman and his coaching staff build with recruits and their families. It’s also important for a program that has a recent history of instability at the top of the football program.

With things going so well under Pittman after last year’s 9-4 season culminating with the program’s first victory over Penn State in the Outback Bowl, Hog fans don’t like to think of the revolving-door persona the Razorback program had for the better part of a decade.

Arkansas said hello and goodbye to four head coaches since 2011. No firings are good, but three were total embarrassments.

The dirty mess that Bobby Petrino made for himself on the Hill is the stuff of soap operas.

John L. Smith, admittedly a stop-gap move, proved to be more of a kook than a madman with a method.

Chad Morris was the ultimate example of the Peter Principle. He tried to fake it until he made it, but he was in over his head from the minute he met the Razorback players and told them to put their feet on the floor and sit up straight before ever introducing himself. 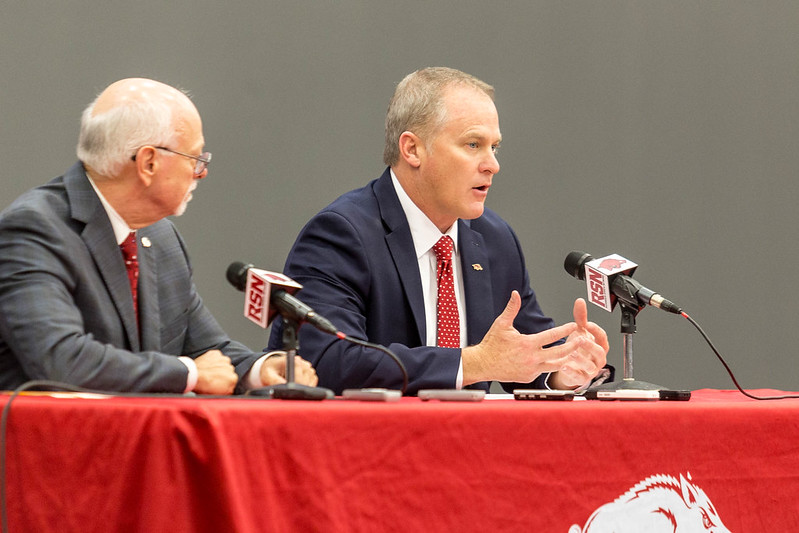 Hunter Yurachek (right) speaks during a press event in 2017.

As for Bret Bielema, he didn’t do too bad of a job for a Yankee in the Ozarks.

However, Bielema was on short notice from the time he urinated in his own recruiting pool by smarting off in a speech to Texas high school football coaches about the Hogs’ then recent victory over Texas Tech. He made light of the Red Raiders head coach Kliff Kingsbury, the son of respected Texas high school coach Tim, and his his philosophy of hurry-up, no-huddle, and RPO football. Many of the coaches in attendance ran a semblance of that offense.

Bielema offended a lot of coaches, who were the keys to recruiting the talent-rich state of Texas. He made the difficult job of reviving Arkansas’ program even harder by creating an unnecessary obstacle for the program by stepping into a Texas-sized pile of manure.

Kingsbury and Co. whipped the Hogs the following season in Fayetteville behind the play of sensational sophomore quarterback Patrick Mahomes. You might have heard of him?

Kingsbury took great delight in rubbing salt into the wound after the victory, letting everyone know in the media conference after the game that the game was absolutely personal to him and other high school coaches in Texas.

The great thing about Pittman is that he may come off like a good-natured ol’ country boy, and he is, but that’s not all there is to him.

While plain-speaking, gregarious and humble in the best fashion, Pittman is an astute practitioner of psychological theory. Simply put, he knows how to treat, relate and respect people. That’s players, coaches, recruits, and even the media. It’s not fake or phony.

Frankly, you feel better about yourself after listening or talking to Pittman. That’s a wonderful trait for the head football coach of a program and fanbase that at times suffers from an inferiority complex.

Because of the way Pittman treats people, players and coaches will go to war for him, and certainly calling play in the SEC war is hyperbole, but not by much.

On one hand, I’d say Arkansas is fortunate to have Pittman as its head football coach, and it is, but honestly doing so without mentioning Arkansas athletics director Hunter Yurachek would be out of place.

While anyone could quibble over a decision here or there, overall Yurachek has the entire Razorback sports program on its firmest foundation competitively since Arkansas left the Southwest Conference for the Southeastern Conference in the fall of 1991 and maybe ever when you consider the success across the spectrum of the program.

Only a period in the late 1970s and late 1980s would compare, under Frank Broyles’ leadership as AD.

Yurachek has accomplished that during the Covid and NIL eras, which have presented hurdles never dealt with by college athletics before.

While the fiasco of chasing Malzahn and hiring Morris without an athletic director in place was a mess from the start, we can’t forget that Yurachek was also hired during that melee. That’s turned out to be an excellent move for the UA athletics department.

Yurachek hired basketball coach Eric Musselman as well as Pittman. He’s kept head baseball coach Dave Van Horn happy with magnificent improvements to Baum-Walker Stadium and the baseball training and practice facilities. Most other Razorback sports are competing at the top of the SEC or near it as well.

It’s a great time to be a Razorback, and while no one can predict the future, the best seems yet to come.